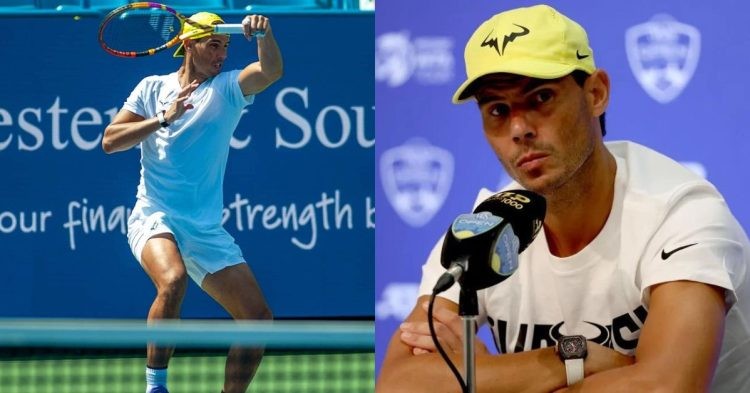 Rafael Nadal has been struggling with his abdominal injury ever since Wimbledon. He pulled out of the semifinal at the All England Club and has not played any tournament ever since. However, he surprised everyone when he announced his last-minute entry for the Cincinnati Masters.

However, Nadal has made it clear that he wouldn’t push himself too much if his body cannot bear it. As per Hindustan Times, he said in a recent interview, “The main thing is to stay healthy and play the events that I want to play. I will not play more than what I believe works well for my body.”

22 Slam titles and it’s all about having fun 😊 #CincyTennis | @RafaelNadal pic.twitter.com/Nts6hihD3S

Rafael Nadal reveals why his abdominal injury is dangerous

During the quarterfinal match of Wimbledon against Taylor Fritz, Nadal struggled to serve well due to his abdominal injury. That is precisely why Nadal’s abdominal injury can be detrimental to his body as well as his career. The injury has compromised his serve and that can be a big advantage for his opponent.

Moreover, he said, “The abdominal is a place that is dangerous because on every serve you put a lot of effort there. I am trying to do things properly, trying to be a bit more conservative.” Even with that kind of injury, Nadal is looking forward to playing in Cincinnati.

He said, “I hope I can be ready for the action here. I want to play tennis again on the Tour. I am having a good season and I am enjoying it. I want to enjoy this week in Cincinnati.” A good performance at the Cincinnati Masters will give Nadal a headstart before the US Open.

Nadal will be aiming for his 93rd ATP title at the Cincinnati Masters. He has confirmed his participation for the US Open and will try to win his 23rd grand slam in the coming weeks.