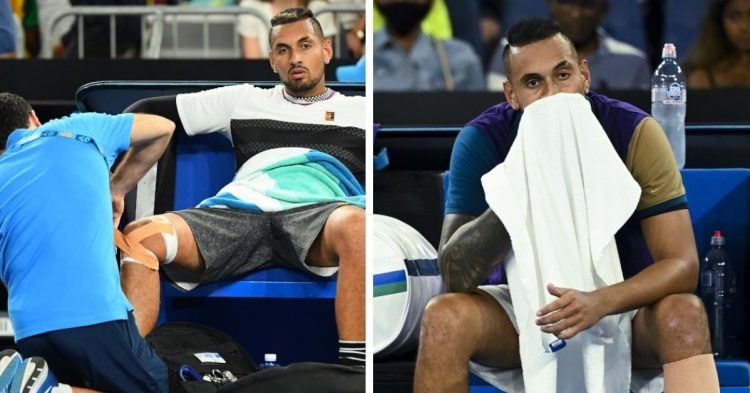 Nick Kyrgios was one of the names to watch out for in the Atlanta Open but sadly it came to an end. He was to play Peter Gojowczyk in the round of 32. However, he pulled out last minute due to a knee injury. Kyrgios did not take any risk considering he is due to play the US Open in the coming weeks.

However, he still appeared on the court to address the crowd that was waiting to watch him play. He expressed his regret and thanked the fans for their support. As per Fox Sports, he said, “First of all, I just want to say I’m extremely shattered that I’m not able to compete tonight.”

“I’m shattered that I’m not able to compete tonight…all I wanted to do was come out here and give you guys a show.”

Kyrgios has been in fine touch this season and even reached the final of Wimbledon. He also realizes the same and decided to pull out of the tournament to keep himself ready for the US Open. Moreover, the Aussie said, “I’ve won this tournament once and I’ve played probably some of the best tennis of my career. All I wanted to do was come out here and give you guys a show, obviously just see what I’m capable of.”

Even though Kyrgios pulled out of the singles event at the Atlanta Open, he still might continue to play the doubles with his partner Thanasi Kokkinakis. He said, “But I’m unable to give out my best performance today and I’m just extremely sorry. But I’m going to keep my hopes up and maybe be able to continue doubles with Thanasi this week.”

Kyrgios and Kokkinakis are due to play Escobar and Reese in the quarterfinal of the tournament. The longtime friends have become strong doubles players and even won the Australian Open together this year. It is fair to say they have a real shot at winning the Atlanta Open this year.

Kyrgios further said, “I hope you all won’t be too hard on me. I was going to come out here and see you guys face-to-face to tell you that I love you guys and hopefully next year in singles I’ll be able to compete and give it my all.” Kyrgios will look to shake off this injury and come back stronger at the US Open.