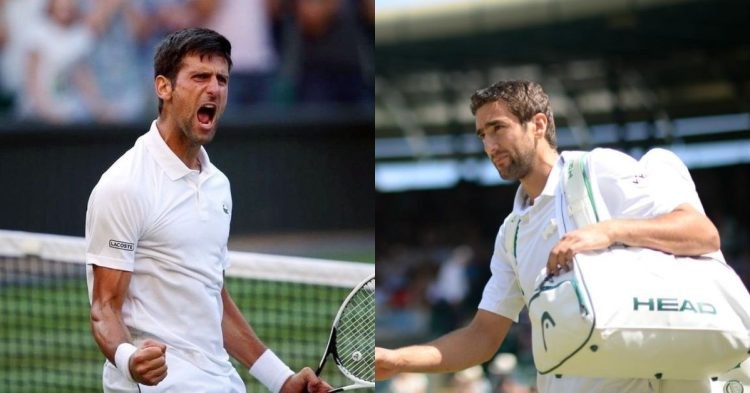 Croatia’s Marin Cilic is one of the first players to withdraw from Wimbledon after testing positive for Covid. He was all set to play America’s Mackenzie McDonald on day two of the tournament. Cilic was one of the main players who had the potential to take on players like Nadal and Djokovic.

However, Cilic released an official statement on Twitter stating the reason for pulling out of the event. He said, “Hey guys, I am sad to share that I tested positive for COVID.” After his statement, it was later revealed that Italy’s Matteo Berrettini also pulled out of the tournament citing the same reason.

Cilic was clearly sad to end his grass season in such an abrupt manner. Moreover, he said in his statement, “I am heartbroken to be missing Wimbledon and see my grass season end this way.”

One of the officials at Wimbledon said, “We are following UK guidance around assessment and isolation of any potential infectious disease.” The Croatian has won the US Open in the past. However, the last few years saw his form taking a big dip. Cilic will be replaced by Nuno Borges for the tournament.

Novak Djokovic at risk after practicing with Marin Cilic before Wimbledon

Novak Djokovic and Cilic had a practice session together at the All England Club a few days back. Cilic testing positive for COVID has put Djokovic’s campaign at risk as well. If the Serbian also tests positive, his bid for the 21st grand slam will but over this year. He is most likely to miss the US Open as he has refused to take the vaccine.

Novak Djokovic & Marin Cilic practicing on Center Court. Not normally a big deal but for Wimbledon it is, as it’s the 1st time competitors have been allowed to practice on the hallowed surface before the event starts. In my time coming here, at least. Good move by the club. pic.twitter.com/BBYRnLgYrN

Cilic revealed in his statement that he had been feeling sick for the past few days and was in isolation. He even considered playing the tournament if he felt better. Moreover, he said, “I have been self-isolating and was hopeful I would be ready but unfortunately I am still feeling unwell and unable to compete at my best.”

Cilic and Berrettini’s Covid results have sparked a scare that could ruin the Wimbledon this year. Other players who came in contact with the two are at the risk of testing positive.