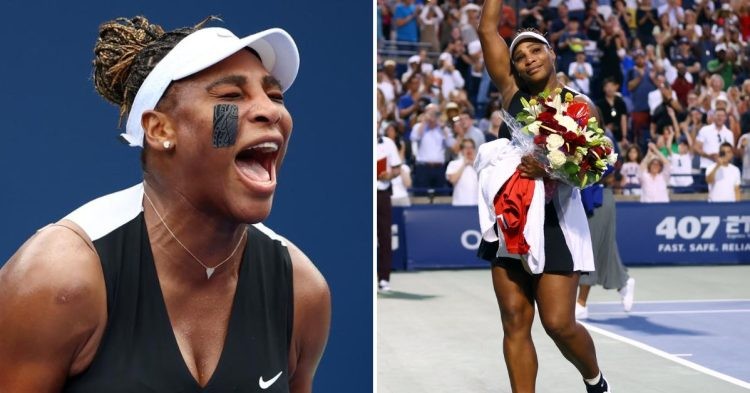 Serena Williams was all over the news and social media platforms like Twitter when she announced her retirement from tennis. The 23-time grand slam winner will hang up her racquet after the US Open. After the news went viral, Serena was welcomed to a packed stadium for the second round at the Canadian Open.

Unfortunately, she lost the match to Belinda Bencic in straight sets. What it meant was that it was Serena’s last match at the Canadian Open. The American tennis legend was honored with a t-shirt and a bouquet and was left teary-eyed at the end of the post-match interview.

Serena did not hold back her emotions and talked candidly about her retirement. As per Republic World, she said, “It was a lot of emotions obviously. I love playing here, I’ve always loved playing here. I wish I could have played better but Belinda played so well today. It’s been an interesting 24 hours.”

Serena has inspired many women in her career and Bencic is one of them. Almost all female tennis players are starstruck by Serena’s achievements and legacy. Even Bencic acknowledged that she was sad to know about Serena’s retirement.

The crowd is standing. And cheering endlessly. For the greatest ever. As Williams says goodbye to Canada.

What a scene here. Williams wiping away tears as she leaves the court. pic.twitter.com/Ekq8cZpODP

She said, “I don’t really want her to retire. I feel like I’ve always, in a way you know what she’s achieved and everything, all her legacy and career and everything. But now that it’s soon to be over I feel like people, and me included, are realizing it even more.”

Serena’s loss at the Canadian Open meant her match against Belinda Bencic was the last match of her career in Canada. While everyone was fixated on Serena’s retirement, the junior Williams made it a point to praise her opponent for knocking her out of the tournament.

Furthermore, she said, “I wish I could have played better but Belinda played so well today. It’s always an honor to be on the court with her and that’s why I think tonight is about her.” Serena will be next seen at the Cincinnati Open followed by the US Open.