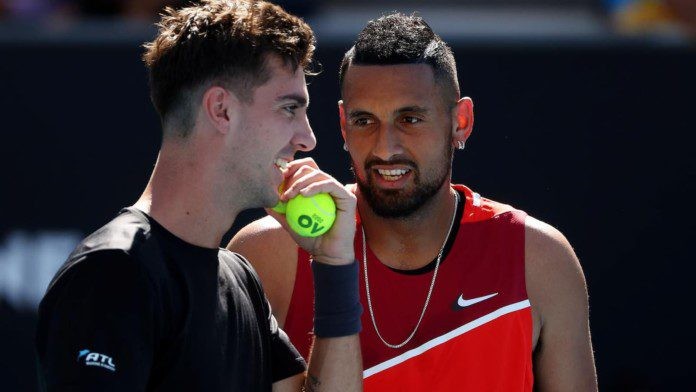 The Australian pair Thanasi Kokkonakis and Nick Kyrgios entertained the audience with a hysterical banter during the post- match on court interview at the Australian Open 2022.

This banter came after Nick and Thanasi won their Men’s doubles match against the pair Gonzalo Escobar (Ecuador) and Ariel Behar (Uruguay) in the third round of the Grand Slam.

The interview began with the question of how difficult it was to gaining a back to back great wins in doubles. Nick picked up the question and answered- ” It’s been pretty easy,” to which the spectators roared in laughter.

The interviewer went on to remind that the pair had previously played the Junior Australian Open back in 2013 and have been mates for a longtime now. He then asked them since they’ve been through a lot, this particular win for special to share. Thanasi responded, referring to Nick- ” I’ve known the big fella since he was a  chubby kid from Canberra. He is slim and looks good now, but we’ve been through a lot together,” when Nick gave him a light smack behind.

Thanasi continued that they may play for fun, but this match, they came out to impress the audience and appreciated their support. He described the atmosphere to be ‘unbelievable‘ and expressed his feeling from the start to the end of the match.

Is this the greatest on-court interview ever? ???????? Kyrgios had the crowd in stitches from the first question! ????#AusOpen – Live on Channel 9 and 9Now pic.twitter.com/A7WfJiWY08

The interviewer said that this felt like a Davis Cup atmosphere and turned the question towards the 26 year old Nick Kyrgios. He added that Nick ‘does some of his best works’ at the John Cain Arena and they have habit if getting him in an hour late. He asked him could he keep themselves for a few more matches. Thanasi interrupted saying that it was okay, and they scheduled the both in the Show court Arena and the atmosphere was incredible.

Nick stated that they would not take anything for granted and that no one knows how many matches they’re going to play at the Australian Open.

“We both lost early in singles, but to come out here and have this atmosphere pretty much for doubles matches is insane. You don’t get it anywhere else in the world, so I’m looking forward to it,” the Kyrgios added.

When the interviewer hoped to see them the next weekend hinting at the finals, Nick jokingly whispered- ” We’re winning it.”

The Aussie duo, Special K  is all set to play against the pair Tim Putz (Germany) and Michael Venus (Australia) in the Quarter-final of the Australian Open 2022, on 25th January.