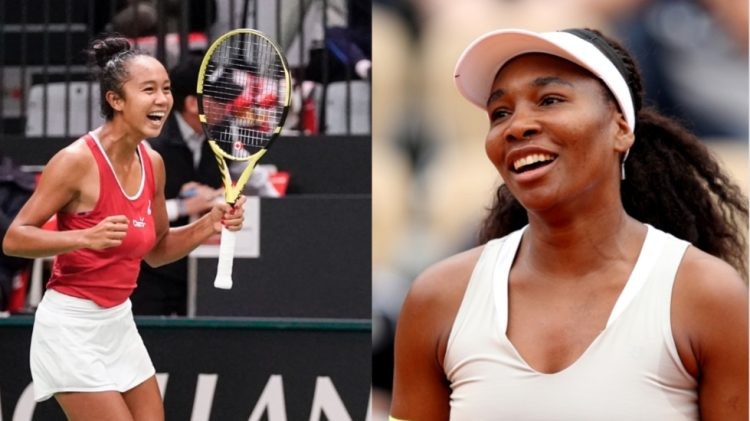 After suffering from an injury, Leylah Fernandez has made a winning comeback in the home tournament in Canada. Before the tournament started the 19-year-old gave a pre-match interview to the press before her come back.

Several little girls were invited to the press conference to ask questions to Leylah. She talked about how she began her career, growing up playing tennis, and much more. She also talked about looking up to various players all her life and then seeing them on a WTA tour.

Leylah talked about getting star-struck when she saw former world no.1, Venus Williams. She said, “Back then I was just in awe seeing all these professionals, I remember one moment, seeing Venus walking past me. I remember thinking, ‘OMG, Venus Williams just passed me’.”

"I remember thinking, 'Oh my god, Venus Williams just passed me', it was one of those introductions" – Leylah Fernandez on how she adjusted to the WTA Tour https://t.co/Dibn4KQGKz

This is Leylah Fernandez’s first time playing at Toronto’s National Bank Open. The previous version of the same tournament happened in 2019 when Leylah was 16. She has since then won the junior Roland Garros and has been given a wild card entry to the tournament.

Rising Canadian tennis star, Leylah Fernandez sustained a right foot injury in the first round of the 2022 Roland Garros quarter-finals where she required medical treatment. However, she played the match against Italian player, Martina Trevisan and faced a 6-2, 6-7 (3), 6-3 defeat. After the match, Leylah said, “Today was definitely hard luck. I did feel it before the match, but I didn’t think much of it. You know, it just happened and we are just going to have to learn from this.”

Fernandez made a winning comeback to the tennis court. She triumphed over qualifier Storm Sanders 6-4 6-7(2) 6-3 in 2 hours and 41 minutes. Leylah was out of the game since sustaining an injury in the quarter-finals of the 2022 French Open.

Canada's Leylah Fernandez made her return to the court Monday night with a 6-4, 6-7 (2), 6-3 win against Australian Storm Sanders in the opening round of the women's National Bank Open tournament in Torontohttps://t.co/9ZmHjPw8se

After the doctors gave her the green signal to play international matches she said that she is “100% ready.” After winning the match, Leylah said, “It was definitely one tough match. It had everything. It had great moments, bad moments, it had spectacular moments from both players.”

She added, “I was just super happy that I was able to play in front of my home crowd. And also that at the end of the match my body feels amazing. So that’s a huge positive. That’s the biggest win that I can ask for.”

The 19-year-old will face Beatrice Haddad Maia in the second round of the tournament. She will also play a doubles match with her sister, Bianca Fernandez this week.