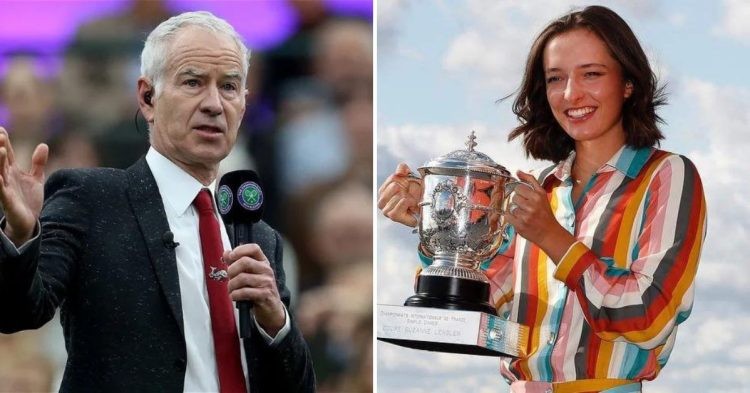 Iga Swiatek‘s dissatisfaction with the US Open balls has reached John McEnroe and he also chimed in on the issue. For the unversed, Swiatek recently complained about the issue of different balls being used for men’s and women’s tennis at the Cincinnati Masters as well as the US Open.

“I don’t get why women use different balls than men!” 🎾#USOpen | @iga_swiatek

Lighter balls are used at the US Open by women and that has not gone down well with Swiatek. McEnroe didn’t go too deep regarding the issue. However, he feels Swiatek will have to buckle and adjust for now to win the tournament.

As per Tennis World, he said, “Maybe there’s some truth to that, maybe the balls are a little bit lighter, maybe she doesn’t like that. But whatever it is, she’s got to come to grips with it. Because she’s still obviously one of the favorites or the favorite.”

Women players have to adjust to lighter balls during the US Open especially after playing with heavier balls all season. Many more female tennis players supported Swiatek on this controversy and it may lead to suitable changes.

However, McEnroe feels Swiatek is a champion player and will figure out a way to play with the lighter balls until the WTA makes the necessary changes. Even though Swiatek has struggled outside clay court this season, McEnroe is confident that she can make a mark in the hard court as well.

Furthermore, he said, “Even though she hasn’t done well, she’s still going to be No. 1 seed. And people are going to expect you to do well. She’s an incredible athlete and I believe that she’ll figure it out and she’ll win majors. I believe she’ll win some on a faster hard court. I don’t think that she’s only going to win on clay.”

Swiatek is currently ranked number one as per the WTA ranking even though she has struggled during the grass season. She continued her poor form in the hard court season crashing out early in the Cincinnati Masters as well as the Canadian Open.