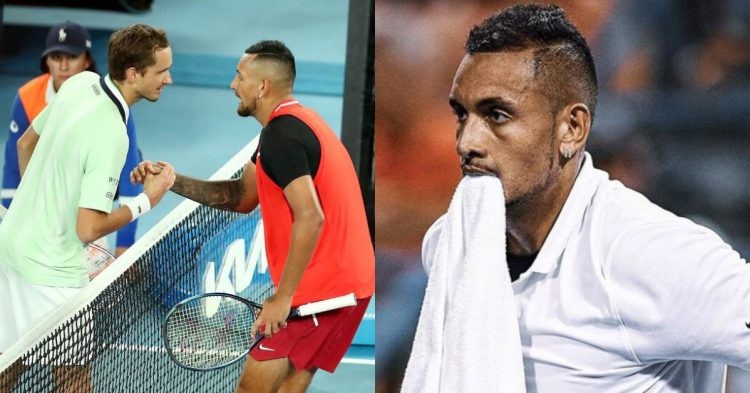 Nick Kyrgios recently won the Citi Open and is in the form of his life right now. After winning the Citi Open, he has now flown to Ontario for the Canadian Open. In fact, he won the first-round match against Sebastian Baez in straight sets to advance to the next round.

However, it has been a tough time for Kyrgios mentally. He revealed during the post-match interview that both his father and mother are ill. To play tournaments under such circumstances can be an uphill battle for any player.

As per Montreal Gazette, Kyrgios said, “It’s hard because even traveling now, my mum is in hospital at the moment, my dad hasn’t been very well, my brother just had a baby and I don’t get to be there with my family when normal people would like to be with them.”

Kyrgios highlighted how people find it easy to call him out for his on-court behavior but don’t really understand what goes in his life outside the court. Furthermore, he said, “There’s a lot of things people don’t see. They only see me winning, losing, throwing a racquet, doing those things. They don’t really understand the challenges that I face or what people on tour face, what’s going on in their personal lives.”

Kyrgios will have a tough match in the second round as he will face world number one, Daniil Medvedev. Kyrgios understands very well that the Russian is a quality player and will fight till the very end. However, Kyrgios will try to focus on his skill set to get the better of Medvedev.

Moreover, he said, “He’s a hell of a player, it’s incredible to see how he plays. He returns so far back and hits some crazy shots that we’ve never seen before. He does it his own way, he’s unorthodox, he’s really special to the game.”

The match between the two will be one of the most awaited matches of the tournament. Both Medvedev and Kyrgios are famous for their on-court antics. Therefore, people can expect some drama along with high-level tennis.