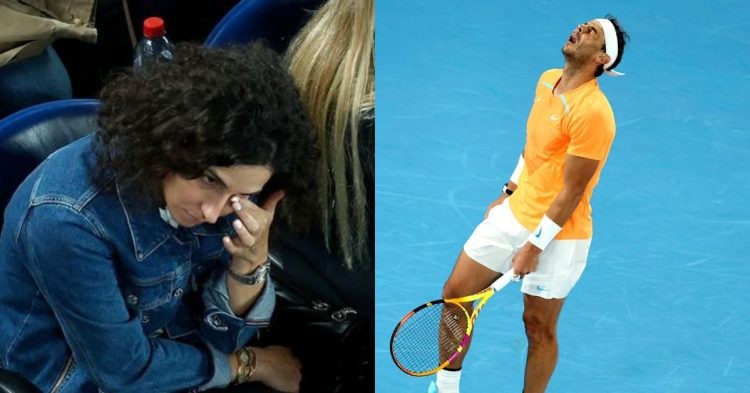 In a shocking turn of events earlier today, Australian Open defending champion Rafael Nadal bowed out of the Melbourne slam after suffering another injury and losing the second round to Mackenzie McDonald with a concluding score of 6-4 6-4 7-5.

A sea of emotions were witnessed at the Rod Laver Arena, amongst whom was Nadal’s wife Maria Perello, who broke down in near tears after witnessing Rafa disheartened on the court with dejected emotions and enduring a potentially fresh injury.

His wife, Maria, was caught on camera wiping off her tears as she witnessed Nadal undergo another injury and his entire team was visibly upset. The Spaniard however, did not exit the court without having the crowd in the Rod Laver Arena honor him with a standing ovation.

In a post-match interview, Rafa revealed that he had been struggling with his hip for a few days now, quoting “It has been a couple of days like this, but nothing like today in that movement. We’re going to start talking about that now, but I don’t know what’s going on if it’s muscle if it’s joint.”

Rafael Nadal, who has a history of injuries concerning his hip and has struggled with such problems extensively over the last season, touched his left hip as he crouched down on his knees during the second set of the match and left the court for a medical timeout.

Is Rafael Nadal’s potential retirement on the horizon?

Rafael Nadal had won the Australian Open two times before and had reached the final four times since, so his exit was a surprise and a disappointment to many fans.

But with the Spaniard now aged 37, and coming off a series of injuries, many have begun to wonder if he should retire from professional tennis altogether.

The question of whether Rafa should retire has been a contentious one. Many of his fans and supporters feel that he should continue to play, as he has been a champion of the sport for so long and has done so much to promote the game worldwide but the Spaniard was devasted with his early exit from Melbourne and said: “I just can’t say that I am not destroyed mentally at this time, because I will be lying.”

That being said, the injuries have taken their toll and Nadal has, in recent years, struggled to reach the heights that he had in his prime. At the end of the day, the decision to retire is one that only Nadal can make, and it is clear that the disappointment of losing in the Australian Open 2023 has also taken a toll on his wife Maria Perello.

Nadal, earlier this week provided fans with clarity on his decision to retire amidst Alexander Zverev’s comments but if his body is no longer able to cope with the demands of professional tennis, then it may be best for him and his family if he does decide to retire.

36-year-old Rafael Nadal is currently ranked world No. 2 and served as the defending champion of the Australian Open 2023. Earlier this week he had cleared the air and discarded speculations of him planning to retire any time soon.

German tennis professional Alexander Zverev in a conversation with Eurosport suggested that the Spaniard might retire later this year commenting “Rafael Nadal will announce his retirement at Roland Garros. I don’t wish him this, but I think he will play a big tournament, maybe wins it, and then says goodbye.”

To this, Nadal gave a sharp response and made it clear to fans that he has no timeline to decide on his retirement and for now is just going with the flow and playing tennis.

“I don’t know what’s going to happen in six months. I have a very good relationship with Zverev, but not enough to confess something like that to him,” added Nadal in response to Zverev’s comments.

Nadal’s capacity to carry forward his performance at an extremely competitive level at an age of 36 also amazed tennis legend John McEnroe, who admitted that the Spaniard has an evergreen hunger for success but fears there can’t be much fuel left in the tank.