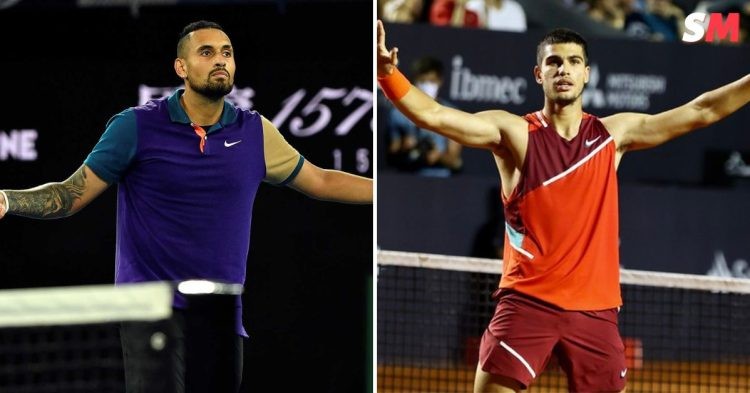 Nick Kyrgios is waiting for the 2022 season to end as he has been continuously playing one tournament after another. The curtains to the 2022 season will be drawn after the US Open and he is definitely one of the favorites to lift the title.

However, when it came to picking a favorite, Kyrgios did not go for himself. Instead, he chose Alcaraz as the favorite to win the US Open this year. It all started when Eurosport posted on Instagram asking people to pick a favorite for the last grand slam of the year.

The options included players like Kyrgios, Rafael Nadal, Carlos Alcaraz, Jannik Sinner, Matteo Berrettini, etc. Kyrgios reshared the post as a story on his Instagram account and wrote Alcaraz as his pick. His decision to pick Alcaraz surprised tennis fans as they expected him to pick himself as the favorite.

Alcaraz has been in the news quite often this year as he has made it to the final of multiple ATP tournaments this year. Moreover, he has even won two ATP titles and defeated players like Djokovic and Nadal at that time to lift the titles. It won’t be a surprise if Alcaraz wins his maiden grand slam at the US Open this year.

Kyrgios has become one of the favorites in the list of almost every tennis geek ever since he made it to the final of Wimbledon this year. While he eventually lost the final to Novak Djokovic, he was still praised for his exemplary performance throughout the tournament.

After exiting Cincinnati Masters, Kyrgios complained about fatigue and is waiting to get some rest after the end of the tour. He has decided to give the Laver Cup a miss to spend time with his girlfriend and family members.