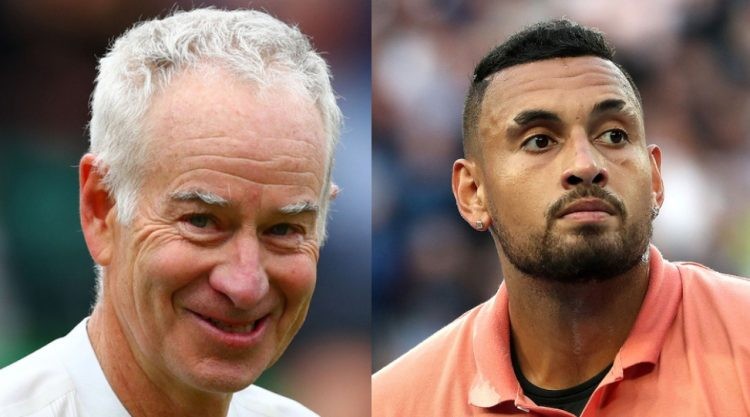 Nick Kyrgios faced defeat at the hands of Novak Djokovic at the 2022 Wimbledon Open final. The Serb won his 7th Wimbledon title and his 21st overall Grand Slam title. He defeated Nick 4-6, 6-3, 6-4, 7-6(3) to win and tied with Peter Sampras at seven English Grand Slam titles.

Nick Kyrgios had a good Wimbledon Open; defeating Stefanos Tsitsipas To move forward in the tournament. However, the Aussie cannot go through with a tournament without any drama. He is feisty character on and off the court. His on court antics get him into trouble more often than not.

Former American tennis player, John McEnroe believes that Nick is to good of a player to be looked over. McEnroe had a similar temperament like Kyrgios during his playing days. He knows how these angry outbursts affect a player.

Doing his thing on the grandest stage 💪​

McEnroe said, “The guy needs Sigmund Freud to come out of the grave and somehow figure out a way to keep this guy going for a couple of years, because we could use him.”

He added, “He’s obviously tortured in certain ways. Unbelievably talented, smart. Hell of a player when he wants to be and so you want to nurture that in a way as an ex-player, as a father, as a fan, as a commentator, so I can relate a lot.”

John McEnroe and Nick Kyrgios have worked together in the 2021 Laver Cup. They know each other well for John to make these comments about Nick. The American having faced similar anger issues during playing days can relate to Kyrgios.

Some of Nick Kyrgios’ outrageous on court behaviour

It seems like Nick Kyrgios cannot compete in a tournament without controversies surrounding him. Wimbledon Open 2022 was no different. He received criticism for his behaviour in the match against Greek tennis player, Stefanos Tsitsipas.

Kyrgios defeated Tsitsipas 6-7 (2-7), 6-4, 6-3, 7-6 (9-7) in a four-set thriller during the third round of the Wimbledon Championships. During the match, Tsitsipas purposely hit a ball into the stands, expressing frustration with himself over dropping a set. Kyrgios complained Tsitsipas should’ve been defaulted for the outburst, leading to a short protest. He would receive a code violation for cussing.

🗣'He moves the needle for us in tennis, we need this big time!'

John McEnroe said, “It’s unbelievable, he moves the needles for us in tennis. We need this big time but we don’t need him to try half the time.”

He further added, “He’s a good kid. The players like him, he’s well liked  in the locker room, he does a lot of charity work. But he’s got demons you know, in a way – we all have this fear of failure and it’s a question of how you best deal with it.”

The Aussie became involved in a war of words after the walkie-talkie of Bernardes went off mid-point in the first set. Towards the end of his first set, Kyrgios shouted, “Unbelievable!”

Nick then went on and smashed his racket on the ground. He faced deduction of a point for ‘unsportsmanlike’ conduct, which he was not happy about. One of his biggest financial punishments came at the Miami Open. On that occasion, he was handed four separate fines totalling £26,500.