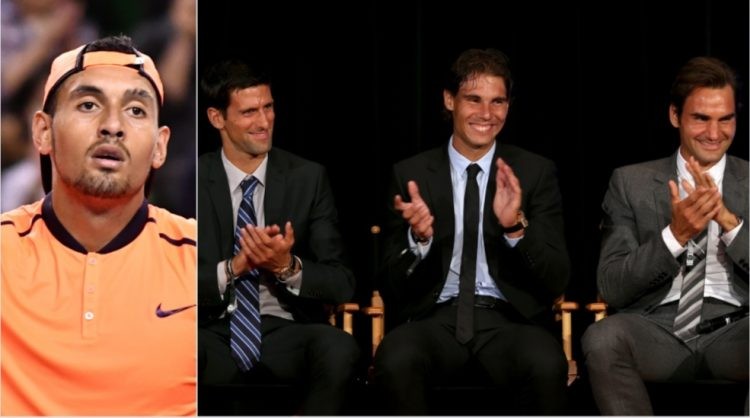 Australian tennis player, Nick Kyrgios suffered a defeat at the hands of Novak Djokovic at the 2022 Wimbledon Open final. Djokovic defeated Nick 4-6, 6-3, 6-4, 7-6(3) to win his 7th English Grand Slam title.
The win prompted him in drawing level with Pete Sampras’s mark of seven titles at the All England Club. With this win, he also moves closer to the men’s record of eight titles held by Roger Federer. He is now one Slam ahead of Federer in the all-time race and just one behind Rafael Nadal’s record of 22 Grand Slam titles.

Winning four back-to-back Wimbledon Open titles, Novak Djokovic cemented his spot as the world’s number one. Impressed with Nole, Nick Kyrgios said, “He’s a bit of a God, I’m not going to lie.”

Recently Nick Kyrgios told the Citi Open Instagram account, “It’s crazy. After I lost the final to Novak it didn’t hit me. It actually hit me a week after that I got to a Grand Slam final at Wimbledon and lost.”

The Aussie has the utmost respect for the Big 3 after his Wimbledon Open campaign. He believes that the strong mental strength that Djokovic, Nadal, and Federer have, helps them in winning the Grand Slam titles.

Nick said, “You just have to be a mental animal to win a Grand Slam. Novak, Federer, and Nadal, I think I give them a bit more respect now. Playing one of them in the final, I felt like he was fresh, felt like he wasn’t playing tennis for the last two weeks, never seen him rattled.”

Nick Kyrgios to play at the 2022 US Open

After a good Wimbledon Open campaign, Nick Kyrgios is ready to play at the 2022 US Open. The Aussie was given a wild card entry to the American Grand Slam warm-up tournament, the Cincinnati Masters. After his heroics in England, Kyrgios will play at the Flushing Meadows after playing the warm-up tournament.

Players like Rafael Nadal who is making a comeback after pulling out of the Wimbledon Open will also play in Cincinnati. Daniil Medvedev and Alexander Zverev will also use this tournament to make a comeback after their injury scares. Nick will play his 6th Cincinnati Masters this year.

I will not be playing this year at the US Open.

It hurts me at my core…But I’m sitting out for the people, for my Aussies, for the hundreds of thousands of Americans who have lost their lives, for all of you. #SincerelyYours, @NickKyrgios pic.twitter.com/7EecHNU82l

In 2020, Nick Kyrgios pulled out of the US Open due to the COVID-19 pandemic. Sharing the news on Twitter he said, “Dear tennis, let’s take a breath here and remember what’s important, which is health and safety as a community. We can rebuild our sport and the economy, but we can never recover lives lost.”

He said, “I’ve got no problem with the USTA putting on the US Open, and if players want to go, that’s up to them. So long as everyone acts appropriately and acts safely.”