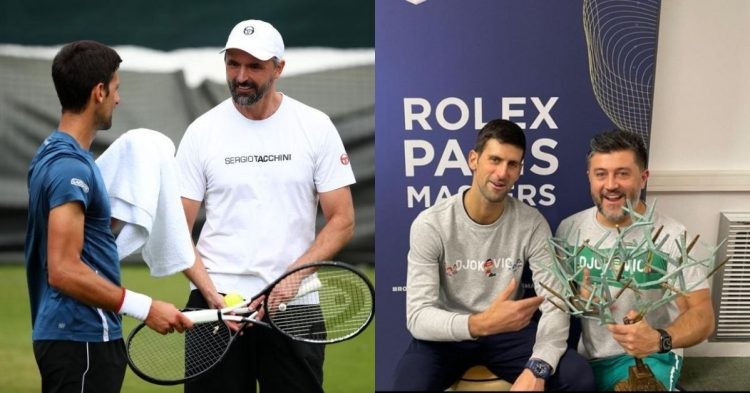 Novak Djokovic is all set to play his Wimbledon final against Nick Kyrgios and is hoping to clinch his seventh Wimbledon title. However, his progress in the tournament is not his victory alone. His coach and his team have worked very hard to improve his game. Ahead of the final, we take a look at Djokovic’s coach and team.

At present, Goran Ivanisevic is the head coach of Djokovic. Ivanisevic hails from Croatia and is a former professional tennis player. Djokovic included him in his team in 2019 before the Wimbledon to improve his grass-court game. Ivanisevic won the Wimbledon in 2001 as a wildcard and was ranked world No. 125 at that time. He has also been a runner-up in Wimbledon in 1992, 1994 and 1998.

As per Focus News, Djokovic also has Ulises Badio as his physiotherapist. Badio helps Djokovic with exercises and routines to keep his body flexible and pain-free before matches. Djokovic is easily one of the fittest tennis players and the credit for that goes to his fitness coordinator Marco Panichi.

Why did Novak Djokovic leave his long-time coach Marian Vajda

Djokovic split from his long-time coach Marian Vajda in March 2022. Vajda had been coaching Djokovic since 2006 and has seen him win all his grand slams. The two split briefly in 2017 only to reunite and continue the journey from where they left.

What a journey Marian. 15 years! 🤯😃 You have been by my side during the most important & memorable moments. We have achieved the unachievable & I will forever be grateful for your friendship & dedication. You will always be my family & I can’t thank you enough for everything 🙏🏻 pic.twitter.com/8ihJP2VpiS

After Ivanisevic’s entry into the team, Vajda took a backseat and the former slowly took over as the head coach. Vajda started accompanying Djokovic for fewer tournaments thereafter. After announcing the split, Djokovic tweeted in March, “We have achieved the unachievable and I will forever be grateful for your friendship and dedication.”

Novak Djokovic’s coaches in the past

Djokovic has been coached by many legendary former players in the past. The most notable name was Boris Becker. He coached Djokovic from 2013 to 2016 and helped the Serbian reach his peak. Under Becker, Djokovic won two Australian Open, a French Open, two Wimbledon, and a US Open. Things went downhill for Becker as he declared bankruptcy in 2017. He is currently in jail for hiding assets, related to his bankruptcy.

Boris Becker coached Novak Djokovic for three years from December 2013. Speaking ahead of the Madrid Open, Djokovic said: “Just heartbroken for him.” pic.twitter.com/dtxP3e1OQv

After splitting from Becker, Djokovic teamed with former player and eight-time grand slam winner Andre Agassi in 2017. However, his coaching stint was short as the two split in 2018. The partnership did not last even one year due to constant disagreements between Djokovic and Agassi.