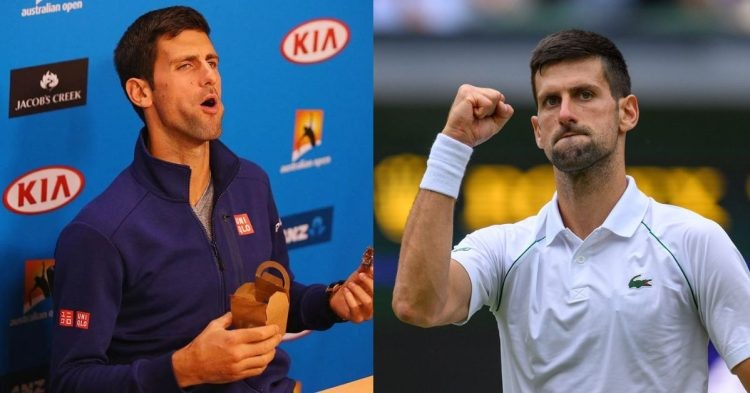 Novak Djokovic is one of the fittest tennis players on tour at the moment. No one takes care of his/her body the way Djokovic does. His fitness is one of the reasons why we don’t see him taking time off the court due to injuries. That is one of the biggest reasons why he is a 21-time grand slam champion.

However, there was a time when he was struggling to keep up with the needs of the sport. That is when he switched his diet and it worked wonders for him. He switched to a gluten-free diet and it helped him tremendously. In 2013, he wrote a book on his diet called ‘Serve to Win‘ which gave a ’14-Day Gluten-Free Plan for Physical and Mental Excellence’.

Djokovic talk about his diet 👍🏻 pic.twitter.com/NbbppFAe6o

While Djokovic doesn’t like the term vegan. However, he avoids eating meats, fish, or other animal-based products. The Serbian also stays away from dairy products and strictly eats only gluten-free foods. For those who don’t know, gluten is a type of protein that is found in wheat.

In his book, Djokovic claimed that the diet not only helps him to stay fit but also provides numerous health benefits. As per the former world number one, gluten can cause mental fog and hormonal distortions which can severely affect the performance of an athlete.

He has a dedicated team that tracks all his activities and movements to keep him in shape. As per Djokovic, his decision to change his diet was a pivotal moment in his career. Moreover, he said, “Physically, I couldn’t compete. Mentally I didn’t feel like I belonged on the same court as the best players in the game. But then, lo and behold, I made some changes and that transformed everything.”

The diet requires a lot of discipline and Djokovic has always led a disciplined life. He said, “The work ethic had always been there, starting with that six-year-old and his perfectly packed tennis bag.” It is not for the weak-minded people but for those who commit themselves to a healthy lifestyle.