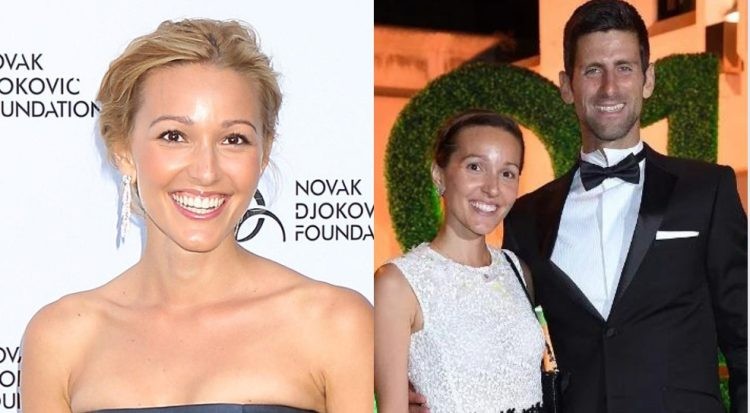 Ben Rothenberg announced on Twitter that Novak Djokovic might have won his last Grand Slam tournament this year. This assumption was made by him because the United States has not lifted the ban on unvaccinated travellers. Therefore, Nole is unable to attend the US Open .

After the Wimbledon Open final, Rothenberg talked to Nole about the 2022 US Open and asked about his stance on getting vaccinated. He told the Serb still that he still has time to get vaccinated before New York to make it in time for the Grand Slam.

Ben then proceeded to ask that if getting vaccinated is something he has completely closed his mind to going forward. To which Nole replied, “Yes.”

Excuse me. Just making sure that it is noted that YOU tagged him as antivax poster boy for whatever reason you have. He simply responded what HIS body choice is.

Ben tweeted his opinion on Novak’s stand on not getting the Covid vaccine and called the Serb “an anti-vax poster boy”. He wrote, “Unless there is a swift change in US immigration law, #Wimbledon will be Djokovic’s last Grand Slam event of the year. US requires vaccination for foreigners to enter, and Djokovic has firmly said he has ruled out getting vaccinated, entrenching himself as an anti-vax poster boy.”

Novak Djokovic’s wife, Jelena was not having anyone bad mouthing her husband. She replied to Ben’s tweet as she defended her husband. She wrote, “Excuse me. Just making sure that it is noted that YOU tagged him as anti-vax poster boy for whatever reason you have. He simply responded what HIS body choice is.”

Till now Novak Djokovic cannot not participate in the 2022 US Open due to being unvaccinated. The vaccine mandate of the United States of America does not allow Nole to enter the country.

The Serb might miss out on the 2022 American Grand Slam. Center for Disease Control (CDC), regulations require non-U.S. citizens to be fully vaccinated to travel to the United States by plane.

You are creating a very judgmental narrative that fits your agenda. He is simply choosing what’s best for his body. If he is not playing because of making that choice, he is fine with it.

Rothenberg was quick point out Novak’s  Australian Open Visa saga to Jelena and how he was deported from the country. He said that after the Australia Open visa debacle, Novak has become a “huge icon of the anti-vax movement.” He wrote, “I understand that it’s his choice, but I also am saying that his decision to be so firmly against the vaccines that it limits his ability to play tournaments has made him, unwittingly or not, into a huge icon of the anti-vax movement. I saw this very clearly during Australia.”

Jelena said, “You are creating a very judgmental narrative that fits your agenda. He is simply choosing what’s best for his body. If he is not playing because of making that choice, he is fine with it.”

Novak Djokovic: “I’m always a proponent for freedom to choose what is best for you.” ⁦@DjokerNole⁩ 🎯👏 pic.twitter.com/d7NrxLH1Sz

Fans around the world are divided with Djokovic’s decisions of not taking the vaccine. Some support the decision while the others do not. They are upset with Novak Djokovic not being able to play in the 2022 US Open. Due to his refusal to take the COVID-19 vaccine, the Serb previously had to withdraw from Indian Wells. He knows it is unlikely that he will be able to gain entry into the United States. He could not play at Indian Wells, because of strict vaccine laws in the United States.