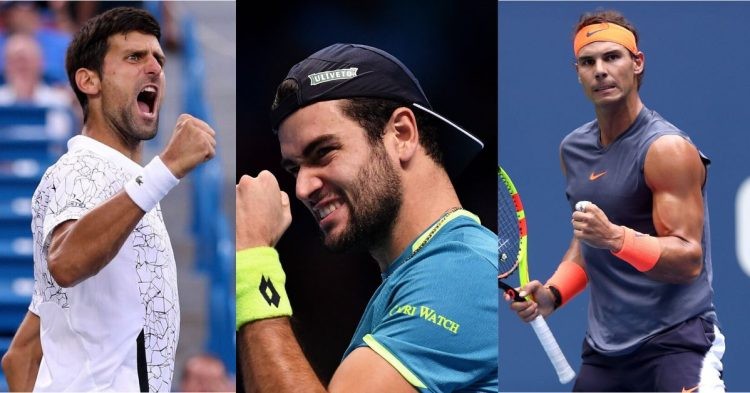 Matteo Berrettini is currently in great form ahead of the Wimbledon. After a long break due to injury, the Italian star has returned for the grass season. Even after a long break, it looks like he is in great touch. His recent performances have made him a threat to all the players.

Recently, Berrettini was asked who would be tougher to play between Djokovic and Nadal. Without mincing his words, the world number 10 revealed that he found Djokovic to be a bigger threat than Nadal. Moreover, Berrettini said, “I’m not saying it will be easy to beat Rafa, but I think Novak it will be more difficult.”

Berrettini has played Nadal twice in his career. Interestingly, he has lost both matches against the Spaniard. Berrettini last played Nadal in the Australian Open semifinal where he lost the match and Nadal went on to win the title.

On the other hand, Djokovic and Berrettini have faced each other three times in the past. Just like Nadal, Berrettini is yet to beat the Serbian star. The two last met in September 2021 in the US Open where Djokovic won the match in four sets.

Matteo Berrettini decides on who is greater between Djokovic and Nadal

Mateo Berrettini was earlier proposed a question of who is greater between Djokovic and Nadal. However, the Italian couldn’t pick between the two and ranked both players as equally great. He said, “I swear, there is no answer. After all, I have lost many times against both of them.”

“Beating Novak Djokovic in a Slam is probably one of the toughest things you can ever do.”https://t.co/9CLcP7A2vR

In fact, he added Roger Federer to the list and called all three athletes the greatest of all time in tennis history. Furthermore, he said, “The two of them, along with Federer, are the greatest tennis players of all time, sublime athletes.”

Berrettini is currently playing in the Queen’s Club Championships as a warm-up before the Wimbledon. He has made his way into the finals and will face Krajinović in the championship match. Berrettini will have to get the better of players like Nadal and Djokovic to make it big in the All England Club this year.