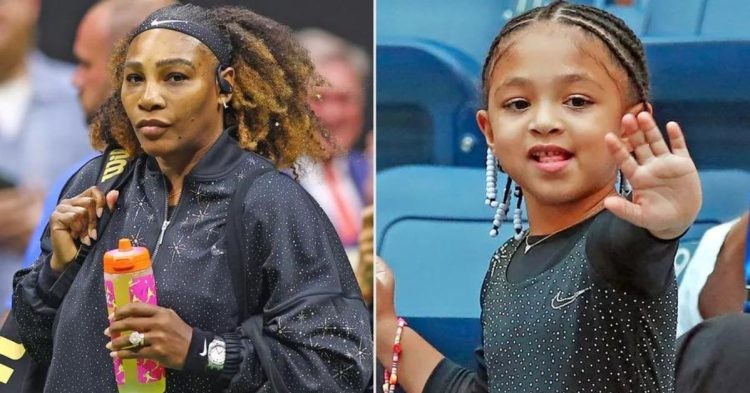 Serena Williams is currently playing at the US Open and this one is truly a special one for her. It will mark the end of her tennis career as she will hang up her racquet once the tournament is over for her. Serena faced Danka Kovinic in the first round of the tournament and won the match 6-3, 6-3.

During the match, the stadium was packed with Serena fans to support her in her last tournament. However, there was a special fan of Serena who cheered for her from the start to the finish. It was none other than her daughter Olympia.

Olympia cheering on Serena is too precious 😭 pic.twitter.com/z53gKZRJVz

Olympia has been accompanying her mother to tournaments ever since Serena made her comeback. She has seen her legendary mother play up close and supported her from the stands. Watching her mother play like a beast at the age of 41 will be truly inspiring for her as well.

Olympia Ohanian sat in the stands wearing a black Nike outfit bedazzled with mini rhinestones. It was a smaller version of what Serena wore for her first-round match. However, that was not the most fascinating aspect of seeing Olympia in the stands.

Olympia had white beads at the bottom of her braids and it was a tribute to one of the most iconic moments of Serena’s career. When Serena won her very first U.S. Open in 1999, she sported similar braids with white beads and her hairstyle turned into an iconic moment.

23 years later:#Olympia wears white beads to her mother’s Final Grandslam of her career – the US Open❤️. #SerenaWilliams pic.twitter.com/ZdO5olnOql

As for Serena, the 23-time grand slam winner is all set to move to the next phase of her career. As per People.com, she said, “I’m ready for the transition. I think I’m good at it, but I want to explore if I can be great at it.” Serena now wants to focus more on her family. She also has a venture capital firm called Serena Ventures and wants to put her time behind that as well.