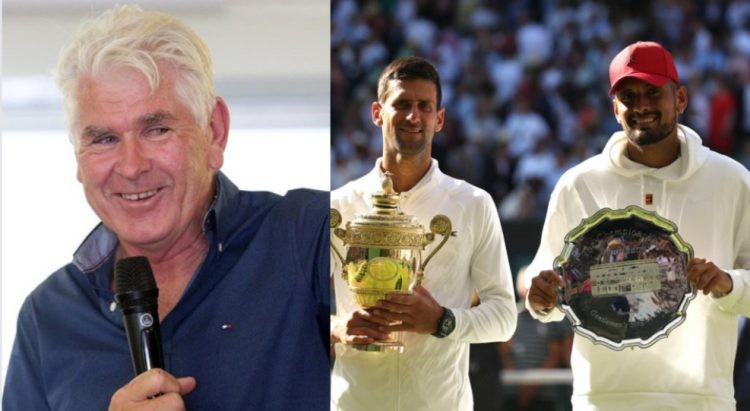 The win at the All England Club tied him with Peter Sampras of winning seven English Grand Slam titles. Winning four back to back Wimbledon Open titles, Novak Djokovic cemented his shot as the world number one. Impressed with Novak, Nick Kyrgios said, “He’s a bit of a God, I’m not going to lie.”

Paul McNamee wrote on his Twitter why he thought Nick could not defeat The Serb. He said, “My final word tonight on the Wimbledon final. The ball striking by Novak Djokovic in the last 3 sets was other worldly.”

He added, “Even a player with the freakish talent of Nick Kyrgios could not stand up to it. Hence he called him ‘a bit of a god’”.

Kyrgios was new to contesting in a Grand Slam final as it was his first. Djokovic playing his 32nd Grand Slam final – which is a record had experience on his side. The experience certainly helped the Serb to play better in the key moments of the match.

Novak Djokovic to possibly miss out on 2022 US Open

The 4th consecutive Wimbledon Open win at the Centre Court means a lot to Novak Djokovic because this is his last grand slam of the year. He will not participate in the 2022 US Open due to being unvaccinated.

💪🏻 Novak Djokovic:
“I understand that being unvaccinated today, I’m unable to travel to most of the tournaments… that is the price I’m willing to pay.
The principles of decision making on my body are more important than any title, or anything else.”https://t.co/Jbm5hkWH9g pic.twitter.com/ZdNGSxS3Bd

Due to the vaccine mandate of the United States of America, Nole might miss out on the American Grand Slam. Center for Disease Control (CDC), regulations require non-U.S. citizens to be fully vaccinated to travel to the United States by plane.

Fans around the world are upset with Novak Djokovic not being able to play in the 2022 US Open. Due to his refusal to take the COVID-19 vaccine, the Serb previously had to withdraw from Indian Wells. He knows it is unlikely that he will be able to gain entry into the United States. He could not play at Indian Wells, because of strict vaccine laws in the United States.