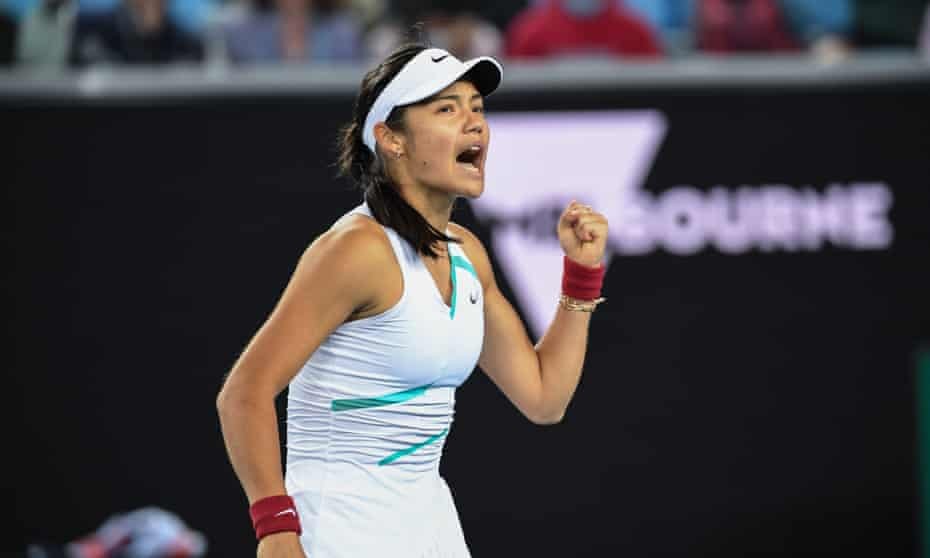 Emma Raducanu in the match against Danka Kovinic earlier today

British Emma Raducanu suffers loss to Montenegrin Danka Kovinic after putting up a tough fight at this year’s Australian Open 2022.

Scripting the history as the first qualifier to win Grand Slam at the US Open 2021, Emma Raducanu could not achieve her dream of winning an Australian Open title.

Raducanu lost to Danka Kovinic, although she put up a great fight against the Montenegrin player. The three set match ended with Emma losing by 6-4, 4-6 and 6-3.

The 19 year old had to exit the first Grand Slam tournament of this year in the very second round owing to her sustaining hand injury.

This defeat is only the first time that Raducanu has lost a completed match. The British champ’s previous loss was when she withdrew from the fourth round of Wimbledon last year, against the Aussie Ajla Tomljanović, due to her breathing difficulties.

Emma Raducanu has sailed past Sloane Stephens of the USA in the first round of the Australian Open 2022. Whereas the unseeded Danka Kovinic defeated Jang Su Jeong of South Korea to meet Emma in the second round.

During the post- match press talk Raducanu shared– “Before the match there were people in my team who didn’t want me to play. I fought so hard just to come out to Australia and play here, so I just left it all out there on the court.”

Emma Raducanu further said that she held back herself from hitting any forehands and serves in order to preserve herself for her match with Danka Kovinic.

The reigning US Open champ needed more treatment at 3-2 of the second set. She used drop shot and slice to keep her injury intact while she conquered the second set.

As Emma Raducanu ‘s performance was hampered by the hand injury, her opponent Kovinic rose to fight back by clinching five straight games. In the third and final set, while the blisters bothered Emma constantly, Kovinic got better and in turn conquered the match.

The Montenegrin player Danka Kovinic is all set to meet Romanian player Simona Halep in the third round of the Grand Slam scheduled to take place on 22nd January.