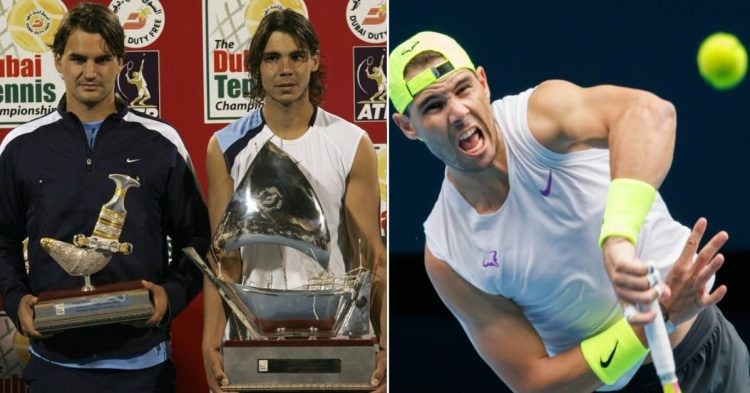 Rafael Nadal marks his return to Dubai in 2023 (Credit: Twitter)

Rafael Nadal will make his long-awaited return to the Dubai Duty-Free Tennis Championships (DDFTC) next month, 15 years after his last competitive appearance in the UAE. Currently ranked No. 2 in the world, Nadal will return for the annual ATP 500 event, which runs from February 27 to March 4.

“As one of the most instantly recognizable personalities in global sport, and one of the most decorated players to ever grace the game, we are absolutely thrilled to welcome Rafa back to the Dubai Duty-Free Tennis Championships after 15 years,” said Colm McLoughlin, executive vice chairman and CEO of Dubai Duty-Free.

When was the last time Rafael Nadal competed in Dubai ATP?

Nadal, the DDFTC men’s champion in 2006, last appeared at the Dubai Duty-Free Tennis Stadium in 2008. Since then, he has established himself as one of the greatest male players in tennis history, winning a record 22 Grand Slam titles.

For the better part of the last 15 years, Nadal has featured in the Acapulco Open in Mexico, skipping the Dubai ATP. However, it will be a different story this time around as the Spaniard will finally make his return to Dubai after more than a decade. There is no clarity regarding Nadal’s absence from the Acapulco event this year, however, fans are of the idea it has to do with the “lack of funds.”

Last year when Rafael Nadal decided to skip the Acapulco Open, here’s what the tournament director Raul Zurutuza had to say. “The relationship with Carlos Costa (Nadal’s agent) is super good and things were very open, the reality is that there are no funds to pay.”

Nadal won the Acapulco title last year, his fourth title at the event. The Spaniard has a 10-3 record in Dubai and won the title in 2006 when he defeated Roger Federer in the final.

Rafael’s return to Dubai has been held in high regard

Having reached the quarterfinals in Dubai in 2005, Rafa walked passed the challenges of Briton’s Tim Henman and Germany’s Rainer Schuttler making his way to the finals where he clashed against former Swedish tennis player Roger Federer.

Nadal concluded the three-setter match with a score of 2-6, 6-4, 6-4 to mark his first victory over the Swiss in an ATP final.

He usually plays Acapulco during that week.

Commenting on Rafael Nadal’s return, Ramesh Cidambi, COO of Dubai Duty-Free and chair of the tournament organizing committee, said: “The whole world has watched Rafa’s extraordinary career and has applauded him as a true champion in the sport of tennis.”

The DDFTC committee is extremely happy that the fans in Dubai and the UAE will now have a rare opportunity to watch him live at the Dubai Duty-Free Tennis Stadium and marvel at his passion, energy, and talent.