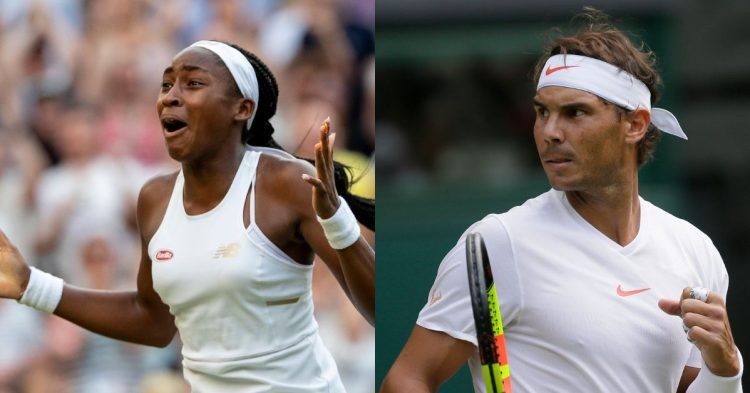 At the age of 18, Coco Gauff has already achieved a lot. She played in the finals of the French Open this year but unfortunately lost the title to world number one Iga Swiatek. However, her aggressive playing style has earned praise from none other than Rafael Nadal.

Both Nadal and Gauff are currently playing at Wimbledon. After winning his second-round match, Nadal spoke about Gauff in his post-match press conference. Moreover, he said, “I like her the way that she talks to the crowd, to the press at the end of the matches. She’s fresh. She’s natural. Looks very mature in her thoughts.”

“It means a lot to me. I mean, @RafaelNadal one of the greats, if not the greatest, of our sport right now.” 😳@CocoGauff was nearly speechless when told the 22-time Slam champ sees her as a future multi-major winner:https://t.co/QkO90U1QpY

Gauff has grabbed the eyeballs in the tennis world and Nadal is no exception to that. In fact, Nadal went on to predict that Gauff will be a multi-grand slam winner if she continues to play like this.

Furthermore, the Spaniard said, “I think, yeah, if she’s able just to improve a little bit with this physical performance that she has, probably we’ll talk about the player that she will be: multi-Grand Slam winner.”

Coco Gauff is intimidated by the aura of Rafael Nadal

It is not an everyday thing when one of the greatest players of tennis history praises you. So when Gauff came to know about Nadal calling her a future multi-grand slam winner, she was visibly feeling shy and embarrassed. Moreover, she said, “It means a lot to me. I mean, Rafa’s one of the greats, if not the greatest, of our sport right now.”

“One of the greatest in the sport”- Coco Gauff heaps praises on Rafael Nadal https://t.co/zFJdkEDPED #Wimbledon #CocoGauff

Gauff admitted she is intimidated by Nadal because of his aura and whatever he has achieved. She recalled an incident during the French Open when Nadal praised her. Furthermore, she said, “I remember responding so late, he was already down the hallway, and I said, ‘Thank you,’ because I was so shocked he actually said that to me!”

Gauff revealed she finds herself dumbstruck every time she sees players like Nadal, Djokovic or Federer. In fact, she went on to say the same for Serena and Venus as well.