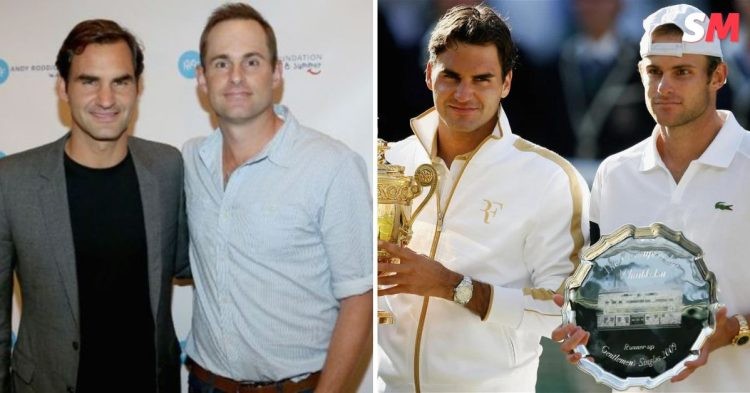 Andy Roddick created a name for himself in the tennis world despite being overshadowed by the legacy of Roger Federer. During his career, he managed to win one grand slam but that hardly justifies his skills as a tennis player. Other than that one grand slam, he has lost four grand slam finals, each time to Federer.

In a recent interview with the New York Post, Roddick was asked about the biggest obstacle of his career. Without any hesitation, he called Federer as the biggest obstacle. The answer was fair as it was the only obstacle he failed to overcome when it came to grand slam finals.

As per Roddick, he had a completely different style of play compared to Federer. As per him, the Swiss maestro continued to challenge his style and that is also the reason why he lost most of his matches against Federer.

Furthermore, he said, “There wasn’t much that I did well naturally that he couldn’t counter naturally. I knew that I had a little bit more power through the court. And similarly to Roger and Rafa, that matchup is more difficult on Roger because of the lefty and the spins. Roger forced me out of my comfort zone consistently.”

The 2009 Wimbledon final was probably the most mentally taxing match ever played by Roddick. Unfortunately, he didn’t even get to lift the trophy as he lost the final against Federer. The match went down in the history books as the longest grand slam final.

Recalling the match, Roddick said, “The only thing that I would really change is the result, and winning two more points one of five times. But as far as having a game plan, executing it at the highest level in the biggest moment, I felt like I did that over the course of 4 ¹/₂ hours.”

Roddick also recalled something his coach Jimmy Connors said to him at that time. He said, “One of my coaches Jimmy Connors had a saying: ‘Operation successful, but sometimes the patient dies.’ And that’s the way it felt that day. I felt like I did as much as I could, save for winning two more points.” Despite losing so many grand slam finals, Roddick will still be remembered as a great tennis player.