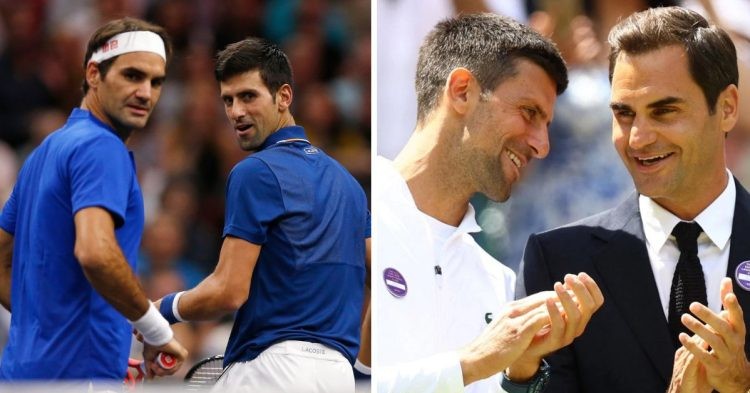 Novak Djokovic has shared a long and intense rivalry with Rafael Nadal and Roger Federer. With Federer touching 41, it is almost time to bid adieu to one of the members of the exclusive Big Three club. In a recent interview with Graham Bensinger, Djokovic talked about how the rivalry with Federer and Nadal have helped him in his career.

As per Tennis World, he said, “We pushed each other and became even stronger. The rivalry between me, Rafael Nadal and Roger Federer has been good for tennis and for sport in general.”

Federer has been out of court for more than a year now and will return to action at the Laver Cup later this year. He will team up with Nadal and Djokovic to play for Team Europe. However, he has also expressed his interest in retiring from the sport in the future.

Showering further praise on Federer, the Serbian said, “Roger inspired me in so many different ways. He showed me and the Next Gen how to best organize private and professional life. In addition to being an extraordinary champion, he has always been an example of class and elegance.”

While Federer has maintained his physical fitness over the years, his knee has been troubling him for quite some time now. Moreover, he is taking more time to recover from injuries, now that he is getting older. However, Djokovic does not agree with the same.

He said, “I think he will play for many more years. His physique is fine, he hasn’t had many injuries and has all the credentials to get the Grand Slam record.”

It will be an iconic moment to see Nadal and Djokovic play alongside Federer at the Laver Cup. The three stalwarts of tennis will play with each other instead of playing against each other. There won’t be another time in the history of tennis when three players will dominate the way Djokovic, Federer, and Nadal have for the more than a decade.