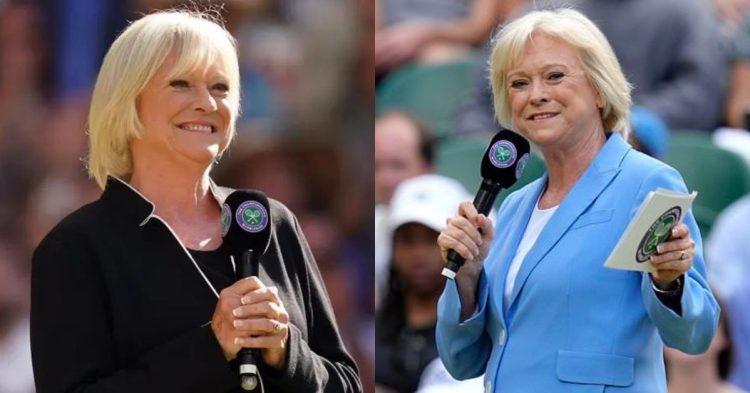 Many of you probably don’t know who Sue Barker is and how she is important to the sport of tennis. She has been the lead presenter for Wimbledon for the past 30 years. Barker has interviewed many iconic players at the Center Court but that will come to an end with this year’s Wimbledon.

From everyone here at Wimbledon and beyond, thank you Sue Barker – it’s been a pleasure 💚 💜#Wimbledon

Barker has now decided to hang up her boots after three decades of service to the All England Club. John McEnroe was also a presenter at this year’s Wimbledon. As per Wimbledon’s official website, when he learned about Barker’s departure, he said, “We are going to be lost without you.” He went on to call her ‘The Roger Federer of broadcasting’ and it touched Barker.

Many of you might associate Barker with some amazing talks she had over the years. Someone like Barker has seen the transition of tennis from Martina Navratilova to Serena Williams to Coco Gauff. She has witnessed the greatness of Federer at the Center Court from the very start. In some sense, Sue Barker has not just witnessed history, she has been part of it.

To pay tribute to Sue Barker and her legendary career as a presenter, Wimbledon made a montage video. The video had many legendary players paying tribute to Barker. However, some names stood out more than others. Players like Roger Federer, Rafael Nadal, and Andy Murray surprised everyone including Barker when they appeared in the video.

Former tennis player and legend Billie Jean King was generous in her praise for Barker. Moreover, she said, “You’re a fellow player, I think that’s what makes us feel so comfortable. We know you have been through it, so we go ‘Oh she knows, she gets it’, the highs and lows and all that goes with it.” The tribute and montage moved Barker to tears. She even expressed how much she enjoyed doing her job for the past 30 years.

Barker is not just a presenter but has also played tennis professionally for more than a decade. During her tennis career, she won Wimbledon in 1976 and also reached a career-best rank of number three during that time. Many people will miss Barker for her charisma which made players comfortable while talking to her.