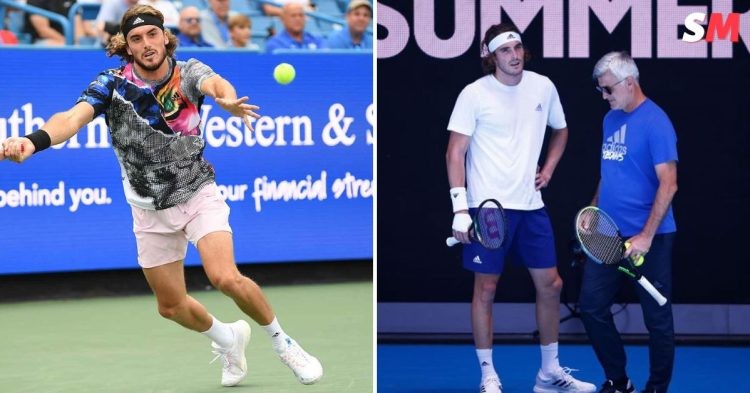 Stefanos Tsitsipas has always argued for off-court coaching allowing players to get tips from their coaches during their matches. In July, ATP allowed off-court coaching which led to debates and discussions regarding the same. Many players have spoken against and in favor of this rule.

Many players have complained about Tsitsipas getting coached by his father and this has strained his relationship with those players. As per Tsitsipas, most players were already indulging in off-court coaching and feels that the rule should have been abolished a long time back. For him, nothing much has changed except for the fact that coaches can now do their job and he can avoid getting fined all the time.

Furthermore, he said, “It hasn’t changed anything for me. It’s always existed for absolutely all players. They should have allowed it thousands of years ago. To authorise it, that involves everyone in the sport. It allows the coaches to do their job, that’s what they’re there for. To be honest, it didn’t change anything for me.”

Tsitsipas has been fined multiple times in the past for getting coached by his father in between points. This has not gone down well with players and organizers. However, now that the rule has been amended in his favor, players cannot be pissed at him for getting tips from his father. Moreover, he will no longer be fined for the same.

As per Express News, the Greek tennis star said, “The only difference is that it’s allowed and that no one is penalized anymore. At least I don’t get any more fines. It was getting difficult.”

Borna Coric becomes the 2022 Western & Southern Open champion after a 7-6, 6-2 victory over Stefanos Tsitsipas in the final in Cincinnati! 🇭🇷@borna_coric | #CincyTennis pic.twitter.com/NDt7XnYxkg

As far as tennis is concerned, Tsitsipas recently played the final of the Cincinnati Masters against Borna Coric. It was surprising to see him lose the match in straight sets. Coric completely dominated the match and turned it into a one-sided affair as the score finally read 7-6, 6-2.

While Tsitsipas lost the final, his journey to the final will be a big boost for him ahead of the US Open. While has has been one of the rising stars of the game, he is yet to win a grand slam in his career.