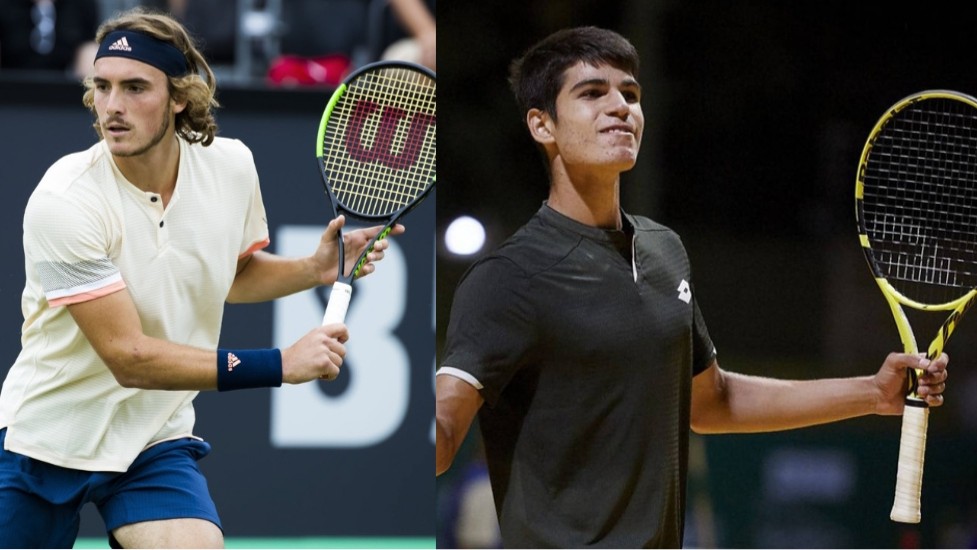 Stefanos Tsitsipas is very impressed with  Carlos Alcaraz, the Spanish tennis sensation. Alcaraz has won four titles in 2022. He won the ATP Masters 1000 Madrid, the Barcelona Open, the Miami Open and the Rio Open. In 2021 he won in Umag. Carlos is having an exceptional 2022 season. He is the youngest active male player to have won multiple ATP titles.

The Madrid Open fin win is Alcaraz’s 7th straight win over a top-10 player and also his tour-leading fourth title of the year after victories in Rio de Janeiro, Miami and Barcelona. He also has the most wins this season, with 28, which is one more than Stefanos Tsitsipas.

The Spaniard became the youngest winner in Madrid. He is also the second-youngest to win two Masters 1000 trophies after Nadal won in Monte Carlo and Rome in 2005.

Stefanos Tsitsipas impressed with Carlos Alcaraz, wants to emulate him

Greek tennis player, Stefanos Tsitsipas relishes the rivalry between him and Carlos. They have met each other three times and the Spaniard has come on top on all three occasions.

Stefanos said, “I think he puts a lot of energy into every single shot. He is quick, he has a good reaction time, he reads the game well. He inspires me a lot. I really want to be like him. I look up to him.”

In his young career, Alcaraz has two Masters titles and considered a proper successor to the “Big 3”. He added, “I know he’s at a young, early stage of his career. I can see him becoming big in a very short time. I’d really like to get to the level he is right now.”

Carlos Alcaraz’s knowledge of the game, according to Tsitsipas is very deep. He is reminded of his days as a young ATP player. He said, “It kind of reminds me of my early days when I was introduced to the ATP Tour. I didn’t really know what to expect along the way. I was just playing carelessly, completely free-spirited. It’s a nice thing to see.”

When Is Lacey Evans Making Her WWE In-Ring Return?