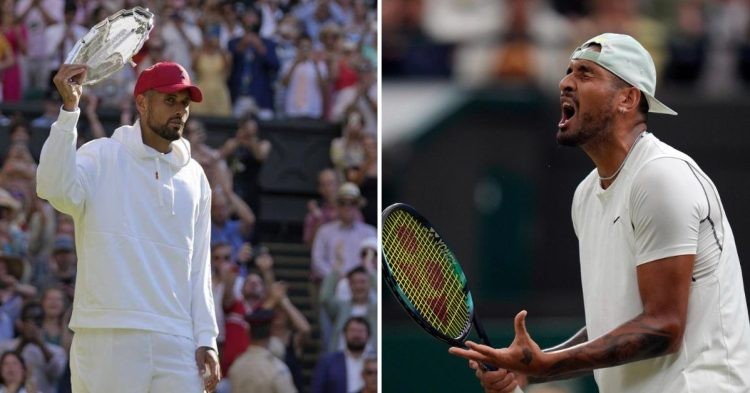 Nick Kyrgios played the match of his life when he faced Novak Djokovic in this year’s Wimbledon final. However, he couldn’t convert the opportunity into a win as Djokovic won his 21st grand slam. Months have passed since the final but it continues to haunt Kyrgios.

As per him, playing a grand slam final is rare for players other than Federer, Nadal, and Djokovic. It was an opportunity that he missed and it might take a while before he reaches another grand slam final. As per Sportskeeda, he said, “Obviously, that match hurts. It was hard. I feel like a Grand Slam final doesn’t come around so often for us normal players.”

Kyrgios won the first set in the final but that did not rattle Djokovic at all. The Serbian shrugged it off and won the next three sets to defeat Djokovic. Furthermore, he said, “Obviously Federer, Nadal, Djokovic played a ton of Grand Slam finals, but that was like the golden opportunity I felt for me. Going up a set as well.”

Nick Kyrgios couldn’t digest that Wimbledon slipped off his hand

Moreover, he said, “I think ever since I picked up a tennis racquet, I had coaches in my ear saying the Wimbledon trophy is the highest accolade you can achieve in the sport. To have that opportunity and come up short wasn’t easy for me to stomach.”

With the US Open coming up, Kyrgios is giving his all to reach another grand slam final. He said, “I’m doing all the right things to put myself in that position again. I think I’m doing that, and my whole team is helping me achieve that goal.” Considering the talent of Kyrgios, he sure has what it takes to reach the final of the US Open.