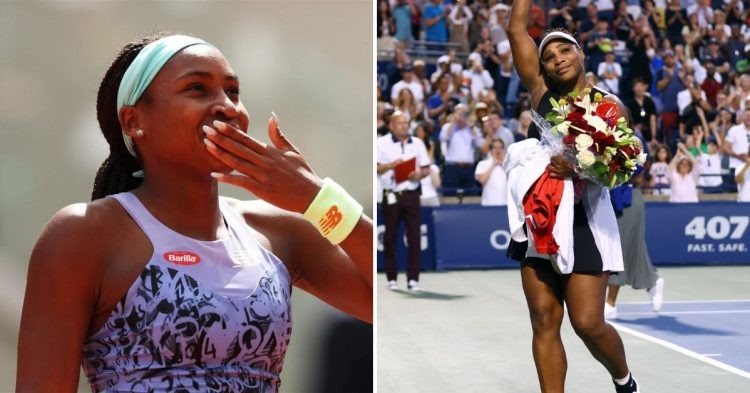 Serena Williams has inspired many women in her career and many young girls have picked up the tennis racquet after seeing her on the court. One such player is teenage tennis sensation Coco Gauff. Gauff has managed to quickly rise through the ranks to become one of the most ferocious tennis players at the moment.

Serena announcing her retirement has obviously disheartened players like Gauff. During a recent interview, Gauff talked about Serena’s legacy. As per Euro Sport, she said, “She’s just been playing forever, my whole life. The legacy that she’s left throughout her tennis career is something that I don’t think any other player can probably touch.”

Gauff admitted that she grew up watching Serena turn from a young player to the legend she is now and that is the reason why she got into tennis. Being a black player, Gauff got the confidence from Serena that even she could dominate in a sport that is filled with white players.

Furthermore, Gauff said, “For me, I grew up watching her. That’s the reason why I play tennis. And tennis being a predominantly white sport it definitely helped a lot because I saw somebody who looked like me dominating the game and it made me believe I could dominate too.”

Coco Gauff talks about being called the next Serena Williams

Gauff has achieved a lot in tennis at such a young age. Her aggression on the court reminds everyone of Serena. She is aware that everyone looks at her as the next Williams. However, all she takes away from Serena’s career is to never succumb to pressure and other people’s expectations.

“The legacy that she’s left through her tennis career is something that I don’t think any other player can touch.” 🤩 @CocoGauff | @serenawilliams pic.twitter.com/rWxcoOJ2Z1

Moreover, she said, “I’ve learned a lot from them [Serena and sister Venus]. People always tell me that you’re going to be next whatever blah blah blah. And Serena has been considered the GOAT for at least the second half of her career. And she never succumbed to that pressure.”

For Gauff, Serena is the GOAT and there is no two ways about it. She rightly thinks that there will never be another Serena and her legacy will last beyond her career and life.