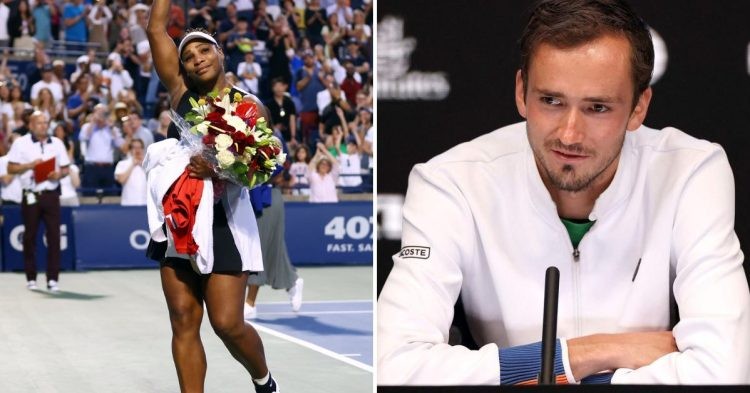 Daniil Medvedev is one of the few players to win a grand slam in the era of the Big Three. Not only has he won a grand slam, but he is also the world number one at the moment as per ATP ranking. While he is slowly coming taking the baton from Federer, Nadal and Djokovic, another legend will retire from the sport after the US Open.

The queen and her court.

Serena Williams was putting in WORK this morning in Ashe. pic.twitter.com/yC45wMUqJ2

Serena Williams will exit the tennis world after a long career. While she is currently preparing for the US Open, tennis players are pouring in with tribute for her by showering praise on her. On the Media Day press conference of the US Open, Medvedev did not shy away from calling Serena a legend.

As per Tennis.com, he said, “It’s just legendary. Every time I saw her in person, she just has this legendary energy around her, which I guess is not easy to live with, because that’s why everybody is a fan of her.”

Serena Williams will go down as one of the greatest players in the history of tennis. With 23 grand slams at the moment, there is no other player with more grand slams in the Open Era. Medvedev is certain that Serena will have a great legacy in tennis.

Furthermore, he said, “Maybe Paparazzi. You come around here, and you’re like, ‘I’m a fan,’ something special. She for sure has and will have an amazing legacy in tennis. I’m sure in hundred years we’re still going to talk about Serena Williams.”

There is little hope for Serena to win her 24th grand slam considering her recent form. She has crashed out of tournaments in the first or second round in the past few tournaments. Nevertheless, the stadiums will be packed for every match she plays.

Medvedev missed Wimbledon due to the ban on Russian tennis players but will defend his title at the US Open. His recent performances in tournaments have not been consistent but he still has the potential to win his second grand slam.