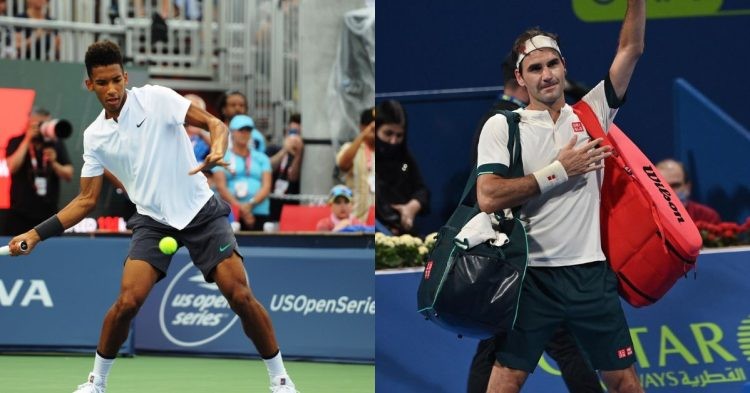 Felix Auger-Aliassime had a dismal Wimbledon campaign as the young Canadian crashed out in the first round. He faced Maxime Cressy in the first round of the tournament and lost his grip on the match after winning the first set. He is currently coached by Nadal’s uncle and ex-coach Toni Nadal.

Tsitsipas, who won the ATP Finals and a Masters 1000 in the past, is now 0-8 in ATP 500 finals. Quite a stat… pic.twitter.com/IOtZMqNiyF

Apart from the forgetful Wimbledon campaign, Felix won his first ATP title this year when he won the tournament in Rotterdam earlier this year. In a recent interview, he was asked about the most famous person that has ever texted him.

To everyone’s surprise, he said the name, Roger Federer. Felix revealed how Federer texted him after his win in Rotterdam to congratulate him. He was pleasantly shocked and surprised to receive the text from a legend like Federer.

As per Tennis Hall of Fame, he said, “He is definitely the most famous person that has ever texted me. When I won my first title this year, he texted me and said he was just very happy for me and congrats. I thought like that was really nice, like I didn’t expect that.”

Roger Federer out of ATP rankings after year-long break

For the first time in 25 years, Roger Federer has dropped out of the ATP rankings. Rankings under ATP are calculated for a player over the tournaments played by him in the past 52 weeks. However, Federer has remained away from the court for almost a year now.

The 20-time grand slam winner got into the rankings in September 1997 at the young age of 16 years. Since then, he had never taken such a long break until last year. Moreover, Federer, who is currently 40 years old, might retire anytime in the coming year.

The Swiss legend recently dropped retirement hints when he revealed that he doesn’t need tennis in his life anymore and has many more things to look forward to. However, he has also revealed his desire to play Wimbledon one last time before hanging up his racquet for the next phase of his life.