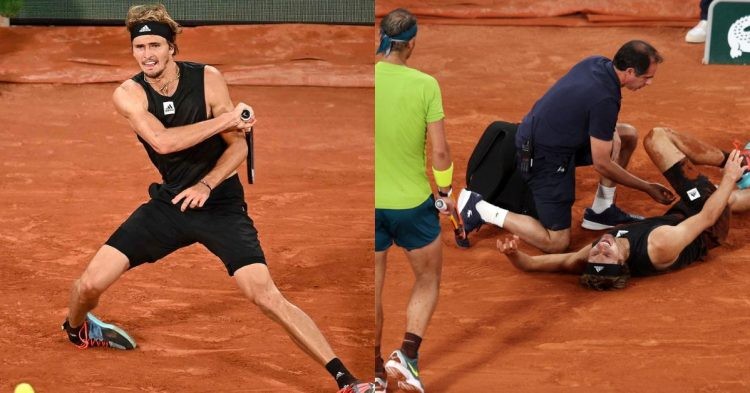 Alexander Zverev recently released a video on Instagram giving an update on his injury. The German missed Wimbledon this year after suffering from a serious injury during the French Open. It all happened when he faced Rafael Nadal at the semifinal of the French Open.

We got an injury update on Zverev.
His ligaments are torn as earlier reports
Final report to come out after Monday.. 🙏♥️
Keep praying #TeamSascha ❤️
We will comeback ♥️@zverev_team @Zverev_fans@saschashoulders @Tennis_Etc_#Zverev #Tennis #RolandGarros pic.twitter.com/upYsNHo4wI

Zverev and Nadal were engaged in an intense battle. Nadal had won the first set in a tiebreaker and the two were tied 6-6 in the second set. That is when Zverev twisted his right ankle and immediately fell to the ground. He was barely able to stand and walked out of the stadium on crutches.

However, in the new video shared by Zverev on Instagram, the world number 2 is seen walking without any crutches. The latest update from Zverev has got his fans excited as they may soon see their favorite player coming back to the court.

Considering how Zverev walked out of the stadium during the French Open, he is far from coming back to the court. The video showed him barely walking without any support. While it is a big update, there is still a long way before he actually makes a comeback.

In an earlier interview, Zverev had made it very clear that he wouldn’t take part in the US Open unless he felt absolutely sure about it. As per him, he would play the grand slam only if he has a shot at winning the tournament.

Sascha walking without crutches, without the big boot 😊

Furthermore, he said, “I won’t be someone who plays after being ready for it for one second. If I play the US Open then to win them and not for one or two rounds. I will only return if I have this form.” While Zverev has not given an update on his US Open participation, fans would be hoping for him to return as soon as possible.

Zverev is currently ranked second as per ATP ranking. Despite not playing the Wimbledon, his ranking did not go down. This is because Wimbledon was stripped of its ranking points this year after the tournament banned Russian and Belarusian players due to the ongoing Russia-Ukraine war. Zverev will hope to improve his ranking once he gets back to the court.