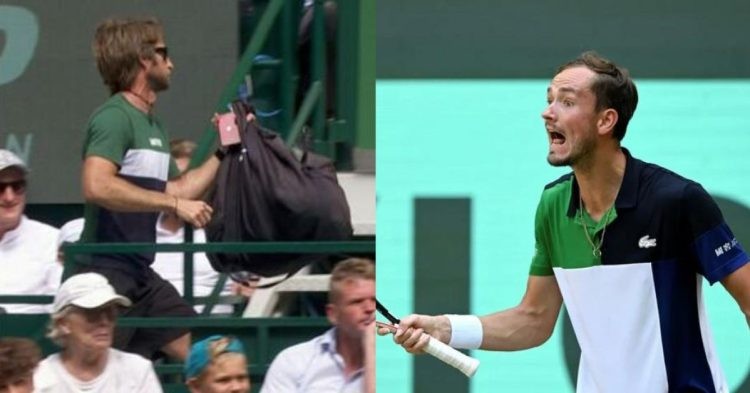 World number 1 Daniil Medvedev played the final of the Halle Open against Poland’s Hubert Hurkacz. While Medvedev was playing really well throughout the tournament, he failed to replicate it in the finals. The Russian tennis star eventually lost the match 6-1, 6-4.

Unfortunately, the finals will be remembered for another controversy. During the match, Medvedev yelled at his coach Gilles Cervara who was sitting near Medvedev’s wife supporting the Russian. The frustration of not performing up to the mark got to Medvedev’s nerves and he finally let it all out on his coach.

When it looked like the controversy was over, it just got worse. Cervara got up from his seat and left the stadium. He looked visibly angry after Medvedev’s outburst. On seeing Cervara leave, the Amazon Prime match commentator said, “Gilles Cervara has seen enough. I can’t quite believe what I’ve seen there.”

When your coach has seen enough 😶#TWO22 pic.twitter.com/EnxYY7vhdM

After the match got over, Medvedev congratulated Hubert for being the better player among the two. He said, “Congrats Hubert, great match today, great week. Congrats a lot to you and to your team, you guys are super nice.”

Medvedev’s wife was sitting right beside Cervara when the controversy took place. She sat in the stands uncomfortably when Cervara left the stadium in anger. It became even worse for her when her husband lost the match in straight sets.

During the post-match interview, the world number one apologized to his wife for the incident. Moreover, he said, “Daria, thanks a lot for this week. Not easy to be with me on the court sometimes but hopefully next time will be easier and much better.”

Medvedev participated in multiple grass tournaments but he will not be part of Wimbledon 2022. Due to the ban imposed by Wimbledon on Russian and Belarusian players, Medvedev won’t be competing for the title this year. This was his second final loss within a week as he previously lost the Libema Open final to T. van Rijthoven.

Playing the warm-up tournaments before Wimbledon has helped Medvedev in solidifying the top spot. There will be no points for the Wimbledon. Therefore, Medvedev’s position at the top remains secure for now.