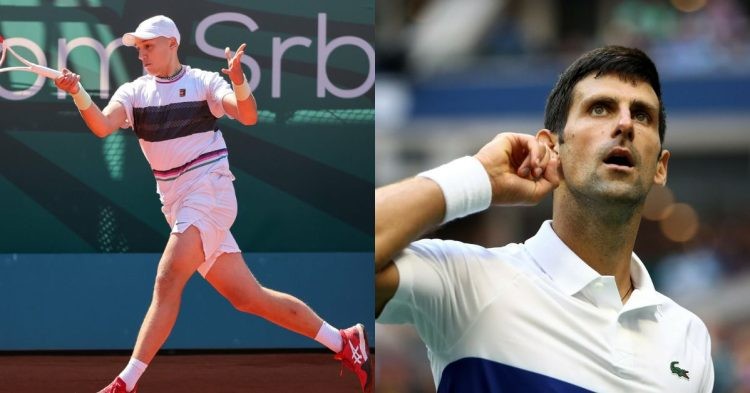 Hamad Medjedovic is only 19 years old and is one of the brightest upcoming players coming from Serbia. His father Eldin recently talked about the impact of Novak Djokovic on Medjedovic’s career. As a fellow Serbian, Djokovic has tried to pivot Medjedovic’s career in every possible way.

“Thank God there are people for whom money is not everything, but humanity” – Hamad Medjedovic’s father on how Novak Djokovic has contributed

“Novak is really trying hard for Hamad. In all ways: financially, mentally and socially.” ❤️https://t.co/4SFywNWdmi

Eldin revealed how Djokovic has helped them financially and mentally throughout his son’s career. At present, Medjedovic is training at the Novak Tennis Center and has access to world-class facilities. Djokovic has taken a lot of personal interest in ensuring that nothing goes wrong in moving Medjedovic’s career forward.

As per Tennis World, Eldin said, “In every possible way: financially, mentally and socially. I remember my second conversation with Novak. Then we specifically talked about the steps in Hamad’s career. And here, I’ll tell you honestly, I pinched myself during that conversation to convince myself that all this was happening.”

Eldin recalled a conversation with Djokovic where the Wimbledon 2022 winner talked about the steps that needed to be taken to maintain progress in Medjedovic’s career. After hearing about Djokovic’s plan, Eldin was worried as it sounded expensive to him.

After expressing his financial concerns to Djokovic, the 21-time grand slam champion made assured Eldin that he would take care of the finances. Furthermore, Eldin said, “Nole, I’m sorry, but it all costs money!’ He continues, suggests me a coach, talks about how we will do, what we will do and adds: ‘It’s up to Hamad to train, I’ll do the rest!”

Eldin was visibly shocked by the generous offer from Djokovic. However, Djokovic revealed why he was helping a young talent like Medjedovic. He said, “Then Novak told me: ‘Edo, I don’t do this for money! I have a place to earn money. Simply, my role and my task is to help. What kind of person would I be if I didn’t help children who deserve it.”

In the future, Medjedovic will become a big player and he will credit Djokovic for his success. There will then come a time when Medjedovic will help a young talent like his current self. While people talk about Djokovic’s tennis career, people often forget about his humility.