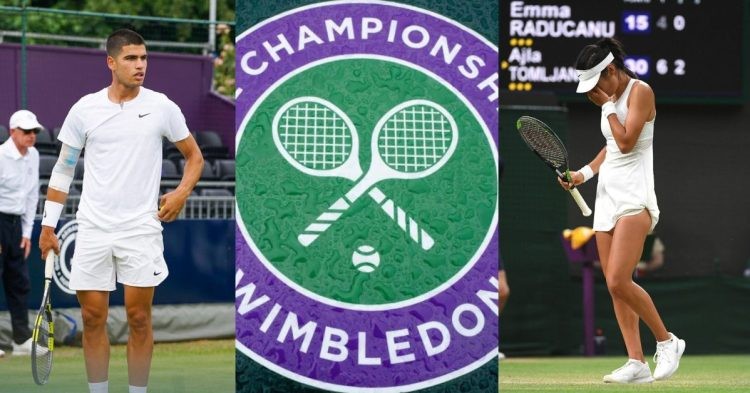 The third day of Wimbledon saw some interesting matches and results. For starters, fifth seed Carlos Alcaraz played Dutch player Tallon Griekspoor in the second round. Unlike his first-round match, Alcaraz eased past Griekspoor 6-4, 7-6(0), 6-3 to advance to the next round.

Andy Murray’s Wimbledon campaign came to an end when he lost his match against America’s John Isner. Isner relied on his strong serve and aces to beat the Brit. Murray did manage to win the third set but that was not enough to stop Isner. The score finally read 6-4, 7-6, 6-7, 6-4 in Isner’s favor.

It was a day of mixed fortunes for the ⭐️ names at #Wimbledon ✍️ https://t.co/N41U7ag3lJ

Seed number one Novak Djokovic had a pretty easy day at the court as he beat Thanasi Kokkinakis in straight sets. Kokkinakis was no match for the Serbian who won the match 6-1, 6-4, 6-2. He will now face fellow Serbian Miomir Kecmanović in the third round.

Seed number nine and ten- Cameron Norrie and Jannik Sinner won their respective second-round matches to march into the next round.

Emma Raducanu crashes out of Wimbledon, Ons Jabeur through to the next round

The women’s side saw one of the biggest upsets as world number 2 Anett Kontaveit lost to world number 97 Jule Niemeier in the second round. Kontaveit was completely dominated by Niemeier as she failed to her serve even once in the second set. Niemeier won the match 6-4, 6-0 to end Kontaveit’s Wimbledon campaign.

US Open winner Emma Raducanu also failed to make it to the next round. She lost her match to Caroline Garcia 6-3, 6-3 in a match that turned out to be a one-sided affair. Raducanu struggled throughout the match which saw her Wimbledon campaign coming to an end.

Seed number three Ons Jabeur continued with her form as she eased past Poland’s Katarzyna Kawa in the second round. The Tunisian marked herself as one of the favorites to win the tournament as she comfortably won the match 6-4, 6-0.

Three-time grand slam winner Angelique Kerber also advanced to the next round after winning her match in straight sets. Kerber, who has found a resurgence in form won the match 6-3, 6-3.