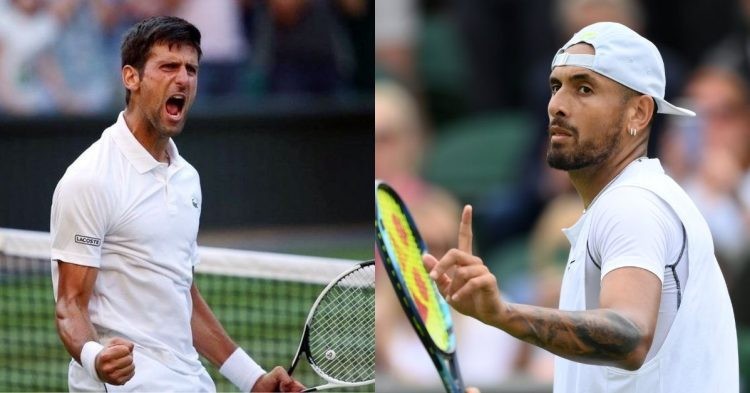 It all started when Kyrgios shared a tweet from Serbian journalist Sasa Ozmo highlighting the good relationship between the Aussie and Djokovic. Kyrgios put it on his Instagram story and wrote, “@djokernole We friends now?”

Djokovic responded to the story and their fun banter turned into a weird deal. The Serbian shared Kyrgios’ story and wrote, “If you are inviting me for a drink or dinner, I accept. P.S. Winner of tomorrow pays.”

The banter did not end there as Kyrgios put up another story responding to Djokovic’s request for a drink or dinner. He wrote in his story, “Deal, let’s go to a nightclub and go nuts.” It looks like the two have already planned a party after the match.

There was a time when Kyrgios and Djokovic were always at crossroads. One incident took place in 2020. Djokovic organized a charity tournament in 2020 with a packed crowd at the peak of COVID-19. While most tennis players stayed silent on the matter, Kyrgios lashed out at Djokovic for behaving irresponsibly.

However, their relationship saw an improvement during the Australian Open controversy surrounding Djokovic. He was not allowed to play in the tournament and was deported back to Serbia after reaching Melbourne. At that time, only Kyrgios came to Djokovic’s rescue as he supported Djokovic and criticized the Australian government for ill-treating the former world number one.

Then it all came down to this year’s Wimbledon when Kyrgios revealed they now share a bromance. Moreover, the Aussie said, “We definitely have a bit of bromance now, which is weird. Everyone knows there was no love lost for a while there.” While their relationship has improved, people expect anything but friendship on the court when th two meet for the Wimbledon final.