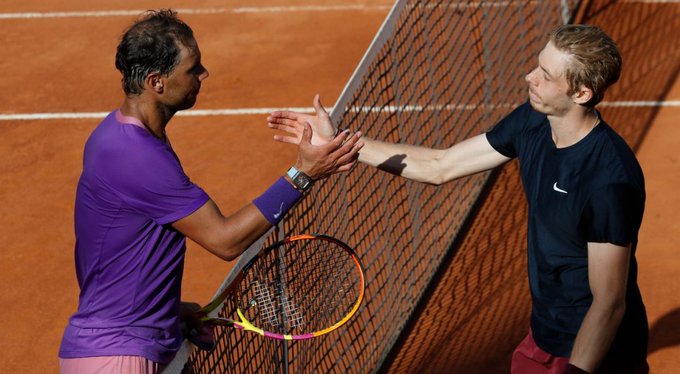 Rafael Nadal moved into the semi-finals of the Australia Open, 2022 after defeating Denis Shapovalov of Canada. He claimed a five set thriller victory over the Canadian to move into his 7th Australia Open semi-final.

Also Read:- “They Are Not Scared Of Her Anymore” – Martina Navratilova Makes a Bold Statement on Serena Williams’ Comeback

In the Rod Laver Arena, Nadal suffered a huge scare as Shapovalov roared back from two sets down. Unfortunately Denis succumbed to the greatness of the Spaniard and bowed out 6-3 6-4 4-6 3-6 6-3 after four hours.

Rafael Nadal is tied on 20 Grand Slam titles with Novak Djokovic and Roger Federer. With Novak deported home from Australia and Federer out of the tournament due to injury, Rafa has a great chance of winning the coveted 21st title.

Denis Shapovalov was coming in this quarter final game after winning against 3rd Alexander Zverev.

Early in the 2nd set some fiery words were exchanged between Denis Shapovalov and chair umpire Carlos Bernardes. The Canadian accused the umpire of being “corrupt”.

Rafael Nadal has a reputation of taking his time between serves and waiting till the last second before serving. The Canadian believed that Rafa deserved a time violation.

Denis Shapovalov complained to the umpire. He said, “You’re looking at the clock so long ago and he’s still not ready to play. You’ve gotta code him.”

Annoyed with the umpire’s reply, Shapovalov said, “Are you kidding me? You are all corrupt.”

After the confrontation with the umpire, Shapovalov and Nadal met near the nets and had a brief discussion.

Channelling the experience of 20 Grand Slam titles, Rafael Nadal kept the Canadian at arm’s length. However the Spaniard then sealed one of his great wins when Shapovalov pushed a volley wide and gave him the victory.  The Canadian ended up smashing his racket into the court in anger.

After the game, at the press conference Rafael Nadal praised the 22 year old’s efforts. He said, “It was very tough today. Honestly I didn’t practice for it.”

“Denis was playing great. He is very talented, very aggressive and he was serving huge. It’s amazing to be in the semis.”

Rafael Nadal will meet the winner of Italian 7th seed Matteo Berrettini and Gael Monfils for a place in the final.