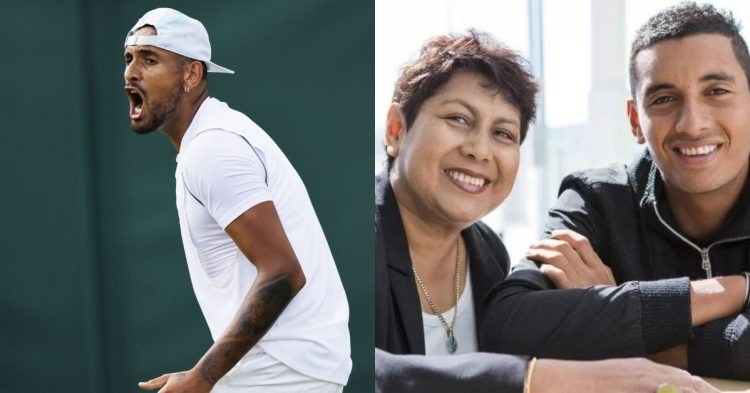 Nick Kyrgios‘ mother Norlaila Kyrgios has played an instrumental role in his career. After he lost the Wimbledon final to Novak Djokovic, his mother talked gave a candid interview to Today. She talked honestly about her son and his controversies in court.

“You don’t want to be in his box,” Nick Kyrgios’ mother reveals how chaotic it gets handling her son’s antics during a match https://t.co/FHDQQFGepF #Tennis #NickKyrgios

During the matches of Kyrgios, fans noticed how he vented his frustration on his support team that sat in the stands supporting him. Tennis fans saw him shouting at his own people and were confused by that behavior. Norlaila accepted that it is a tough task supporting her son from the stands and called it an unpleasant experience.

Furthermore, she said, “You don’t want to be in his box. You really don’t, because you really don’t know when to stand and when to clap and when to shout. We have been there, and it is not a good experience.” His brother Christos was also in the interview and defended his brother’s behavior.

Nick Kyrgios’ mother opens up her son’s rollercoaster life and career in the spotlight, and the side of Nick only she knows. ❤️🎾

As per Christos, it is Kyrgios’ nature to use his support team as an outlet to vent out his frustration. However, her mother had a slightly different view as she found it tough to root for Kyrgios from the stands due to his constant shouting.

Nick Kyrgios’ mother reveals she did not watch the Wimbledon final

For any mother, her son playing in the Wimbledon final is a proud moment and she would watch it from the television if not from the stands. While Norlaila was certainly proud of her son, she did not watch the match even on television.

In fact, Norlaila did not watch any of her son’s matches live. Moreover, she said, “I actually didn’t watch the game. I haven’t watched any of his games. I had a very good sleep.”

Norlaila had revealed in an old interview that she doesn’t watch Nick’s matches live as she has a heart problem and watching the match is too stressful for her. That is probably why she doesn’t even watch the match on television.