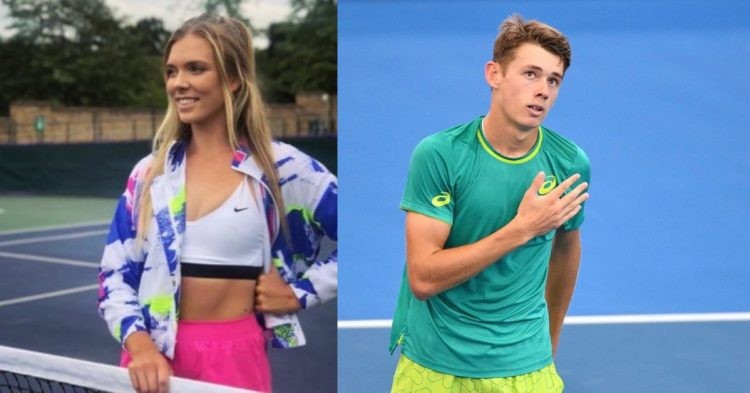 Alex de Minaur and Katie Boulter are having a ball at this year’s Wimbledon. The two have been dating for a while and are always supporting each other’s tennis careers. Alex and Katie won their respective matches in Wimbledon to advance to the third round of the tournament.

Alex faced Britain’s Jack Draper in the second round and won the match in four sets. He lost the first set to his opponent but managed to win the next three to advance to the next round. The final score read  5-7, 7-6, 6-2, 6-3.

Katie had a mountain to climb in her second-round match as she faced last year’s finalist Karolína Pliskova. Pliskova, who is seeded sixth was the favorite to win the match. However, Katie surprised everyone by winning the match 3-6, 7-6, 6-4.

Alex will face Britain’s Liam Broady in the third round. On the other hand, Katie has a tougher draw as she will face France’s Harmony Tan. Harmony beat Serena Williams in the first round and won the second-round match in straight sets.

After winning his second-round match, Alex gave his post-match interview. Even before answering the question, he gave a shoutout to his girlfriend Katie for winning her match. He said, “Before we talk about my match, can we just talk about Katie Boulter today? She had a pretty good win herself.”

That was a heckin’ quality match, and a big win for Alex de Minaur, especially on the heels of a tough loss against another partisan crowd behind Gaston in Paris.

And a very nice shoutout for his girlfriend Katie Boulter to start his interview.#Wimbledon

After winning her match, Katie also had praised her boyfriend for being supportive along with her family and team members. Moreover, she said, “I’m lucky to have such a great support around me, and that does make a huge, huge difference. I’ve got great people, great boyfriend, just a great team who push me every single day.”

Alex admitted he got an extra push seeing his girlfriend beating the best tennis players. He said, “What she was able to do today was an amazing effort. Under all the circumstances, she got out there on Centre Court, and (has) beaten last year’s runner-up. So I think that’s pretty special.” The two will now focus on their respective third-round matches to realize their Wimbledon dream.