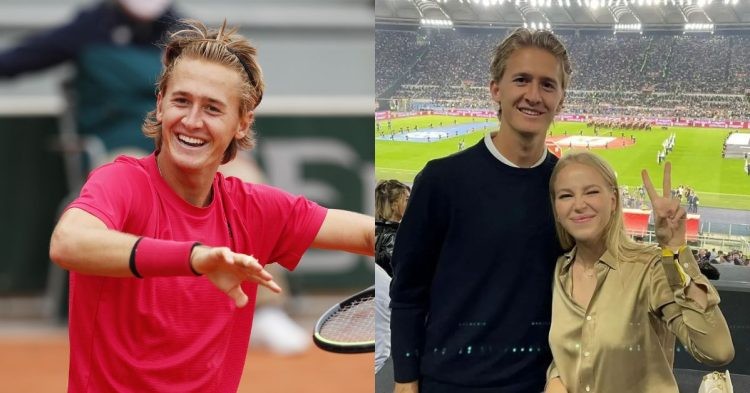 American tennis professional Sebastian Korda has been storming the internet lately with his stellar on-court performances. It is gradually earning him more fans with every ATP Tour match he steps foot on.

Son to former Czechoslovakian tennis players Petr Korda and Regina Rajchrtova, Sebastian first turned pro in 2018 and added to his portfolio his first and only ATP title win in 2021 at the Emila-Romagna Open in Parma, Italy. It made him the first American to clinch a title on European clay.

Korda made a powerful manifest of his powerplay in 2020 at the French Open. He started from the qualifying rounds and eventually paved his way to reach the Championship’s main draw fourth round, where he ultimately lost to the Slam’s defending champion Rafael Nadal.

The 22-year-old player from Florida who is closely followed by his American fans has recently been receiving huge support from enthusiasts monitoring his gameplay. Among his increasingly growing fan base, Korda’s girlfriend is also on the list. She lately has been cheering for him and has been his lucky charm in his touring season.

Sebastian Korda is currently dating Ivana Nedved who is the daughter of acclaimed Czech Republic footballer Pavel Nedved. A former player of the Juventus Football Club, Pave has been decorated with the sport’s most esteemed individual award, the Ballon d’Or which he received in 2003 as the European Player of the Year.

Apart from having herself a huge follower base on Instagram and working as a part-time social media influencer and posting brand-sponsored content, Ivana is currently working as an editorial intern at Vogue Italia and earlier in 2020 worked for Alfa Romeo under the brand and communication department.

The couple has been dating for quite some time now but it is unclear when they initially met and started dating, a mystery that has puzzled several fans but did not fail from earning the couple a notable fan base.

Despite not disclosing intimate details about their relationship, Ivana is occasionally seen posting pictures of Sebastian and herself on social media, providing fans with limited insight into their relationship.

Sebastian at the moment is performing at the Australian Open where he has already advanced to the quarter-finals and seems full of zeal to not let his fate seal coming this further into the championship.