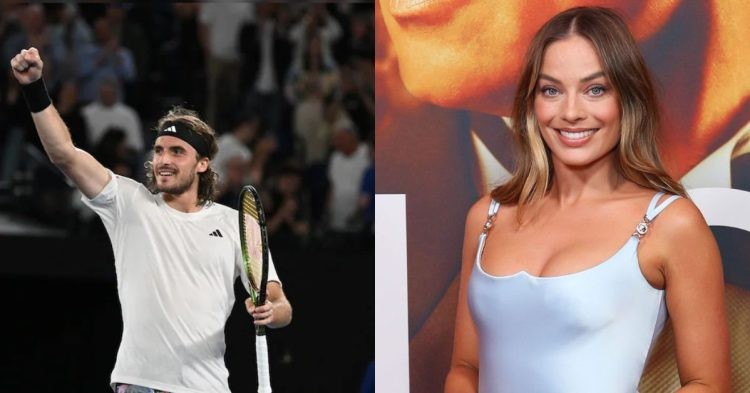 Stefanos Tsitsipas drew laughter from the crowd at the Rod Laver Arena earlier today after overcoming his quarter-final challenge.

The ‘Greek God’ in a hilarious post-match moment on the dazzling court of Melbourne Park, spoke about his love for Australia and extended an invitation to one of the world’s most acclaimed actresses, Margot Robbie, to witness him in action for his semi-final match!

The Greek before stepping foot on the court also called Australia his “home slam” and further went on to highlight how everywhere he goes he sees Greek people owing to Australia being home to a large part of the Greek community.

In an on-court post-match conversation held by former Australian Open champion Jim Courier, Stefanos caught the crowd off guard when he said “Australia is such a great country. I like a lot of Aussie things. One of my favorite actresses comes from Australia, Margot Robbie.”

Witnessing the crowd bursting into laughter, Jim jokingly asked Stefanos “Are you pitching right now? What’s happening? Are you making an offer? What are we seeing here?” to which the 24-year-old Greek replied by saying “It would be nice to see her here one day.”

Stefanos has advanced one step further to taste the Australian Open title after defeating Jiri Lehecka in the quarter-final, booking himself a ticket to the final four of the championship.

Oscar-nominated actress Margot Robbie draws her roots in Australia and also works as a producer. She is known for her work in several movies over years and was also cast in the Oscar-nominated movie, The Wolf of Wall Street.

In 2021, the actress announced to her 23 million Instagram followers that she is taking a break and stepping back from social media. There are however numerous fan pages keeping her fans up to date with the Aussie’s latest endeavors.

Stefanos Tsitsipas‘ invitation, however, might not bear fruit because Margot at the moment is busy promoting her latest project, Babylon, which hit the big screens in December 2022.

Despite Robbie’s potential absence in the stands of Rod Laver Arena, the Greek seems full of enthusiasm to make a run for the Melbourne Slam and, with huge upsets, this season is the highest-seeded player left standing in the championship.

The world No. 3 is now set to face Russian tennis professional Karen Khachanov in the semi-final round and is likely to pool all his efforts to have a shot at lifting the Australian Open title.