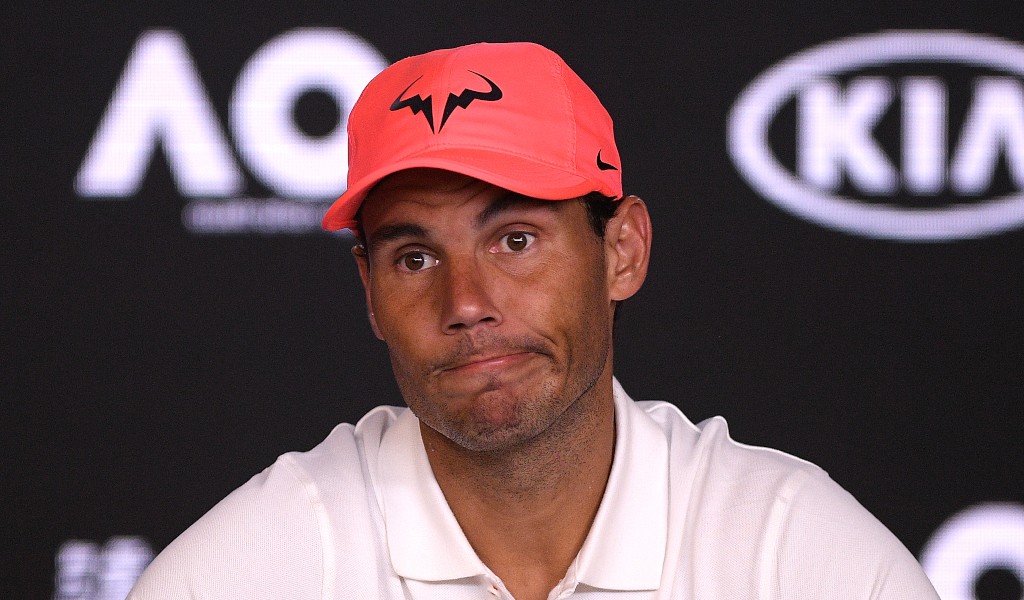 Rafael Nadal of Spain speaks during a press conference after losing his fifth round match against Dominic Thiem of Austria on day 10 of the Australian Open tennis tournament at Rod Laver Arena in Melbourne, Wednesday, January 29, 2020. (AAP Image/Lukas Coch) NO ARCHIVING, EDITORIAL USE ONLY ** STRICTLY EDITORIAL USE ONLY, NO COMMERCIAL USE, NO BOOKS **

The Spanish tennis giant Rafael Nadal Perera has time and again proven that he’s one of the greatest players in the history of tennis.

The Australian Open 2022 champion’s exceptional performance throughout his professional career has earned him a number of nicknames by which he’s referred by.

To begin with the most popular one- The King of Clay Court. Rafael started his Grand Slam title count by clinching the French Open title back in 2005. As early as at the age of 15, Nadal mastered the clay court tennis game and has been known for that mostly, ever since then.

El Matador, Rafa, master of the red clay…these nicknames evoke the greatness, power and sublime ability of this incredible athlete who has reached the summit of world tennis…

???? Here is everything you need to know about the iconic @RafaelNadal.

From that day to date, the clay court champion has claimed the Roland Garros French Open title for 13 times. Moreover, the Spaniard won the clay court Slam tournament consecutively from 2005 to 2014, except for the year 2009 where he had an early exit at the tournament.

Not only Rafael is the King of Clay court, he also has other nicknames on the same line as well.

One of them is the Ogre of Ocher. This name came to be because of the colour of his apparent favourite tennis court surface to play on, which is none other than the clay court. The nickname simply means that Nadal is the giant of the ocher- coloured surface.

The Raging Bull from Spain Tennis fans might have noticed Rafael Nadal wearing headband, T-shirts and caps with the bull sign on it. However, that’s not the only reason the Spaniard is name Raging Bull. It is known that bull marks extreme strength and power, physically speaking. The powerful sign was first seen in Nadal ‘s company since 2013. Since then, it seems to be an inseparable part of Rafael.

Being an outstanding and strong player on court, Rafa is well- suited for the name of Spain’s Raging Bull.

After claiming plenty of tennis titles at a tender age, Nadal has come to be known as El Nino. The simple Spanish word refers to a ‘little boy.’ The World No.4 has worked hard towards improving his game every day since his debut, and from the teenage to present, Nadal has maintained the consistency throughout.

Not only does Rafael play a brilliant game on court, but also has certain rituals which he follows before and during the matches.

Some iconic beliefs that Nadal follows on court are- Lining the bottles right next to each other and the labels facing towards the court, jumping during the coin toss, not crossing paths when the time comes to change the sides of the court and finally the most visible of them all, readjusting his hair and apparels before he serves the ball.

Rafa’s birthplace Majorca’s astronomical observatory took his name up till the stars by naming an asteroid after the Spanish athlete. The asteroid No.128036 was named after one of the best tennis players of all times to celebrate his talent. Thus making Rafa the Legend of land and the sky.

Although Nadal has been referred to being the GOAT after his Australian Open victory, it’s always in debate and he has maintained it doesn’t matter if he is one or not.

The 21 times Grand Slam winner has garnered fame and nicknames through his genius performances for years now. Furthermore, Rafael Nadal has always stated that he would come back for more tennis tournaments in the press talks of the recent past.

3 Things AEW Should Do to Stay in Business