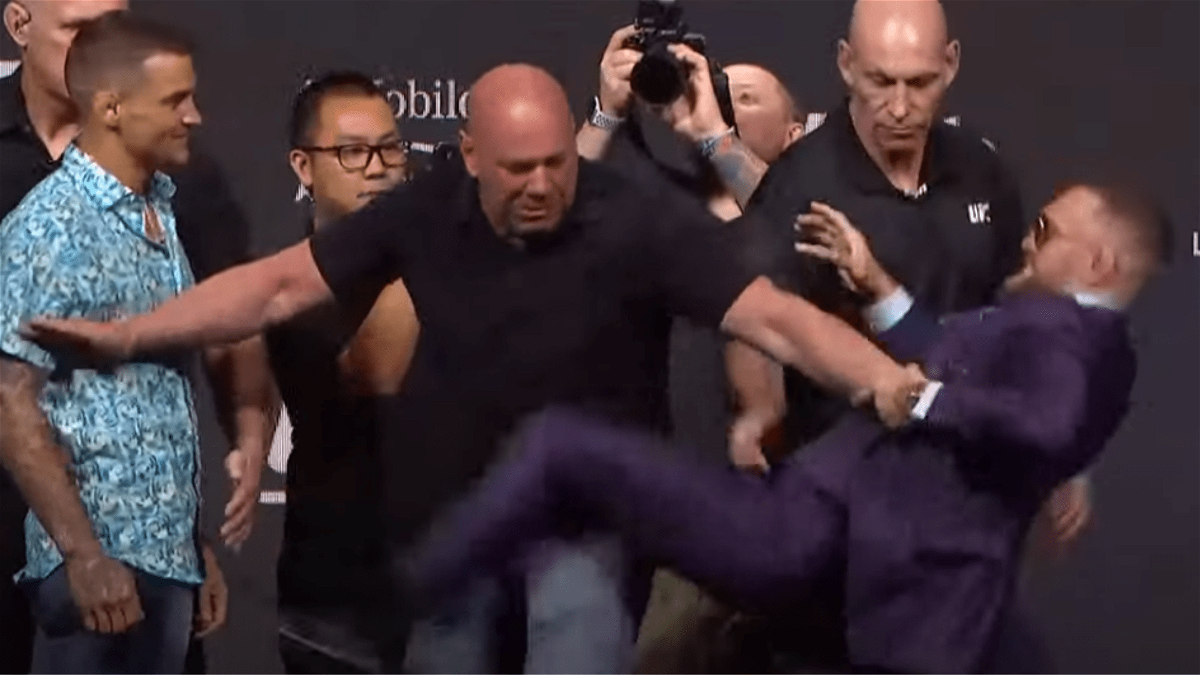 The UFC 264 press conference was as advertised as it comes. The former dual champion Conor McGregor and the former interim lightweight champion Dustin Poirier got into a heated back and forth ahead of what promises to be one of the biggest events of UFC’s history. The UFC 264 live gate has already shattered previous records and has become the third-highest live gate in the history of the UFC just behind UFC 205 and UF C 229.

Needless to say, the vintage Conor McGregor was back in the press conference, shooting subtle digs on Poirier with his mental game. In what was an entertaining night for the fans, the former dual champion left no stones unturned to try to get inside Dustin’s head. Something that has been his approach in his illustrious UFC career.

During the face-offs, McGregor looked more animated and tried to front kick Poirier, barely missing contact as UFC president Dana White held both the fighters. McGregor barely missed, in what could have been an ugly situation for the UFC had Poirier tried to answer back. Fortunately, that wasn’t the case as Poirier did not react much to McGregor’s shenanigans.

It’s a different feeling whenever Conor McGregor fights in Las Vegas. Fans in huge numbers flock in to watch the Notorious, and the same was the case tonight when a large number of fans attended the UFC 264 press conference, often not allowing Dustin Poirier to even speak.

Needless to say, the relationship that Poirier and Conor once shared is long gone, with McGregor admitting that circumstances have changed. While McGregor has remained relatively silent in his last few fights, the Notorious was at his vintage best this time around.

Both Poirier and McGregor have a lot to prove going into the third fight. While Poirier will look to prove that his win in the rematch from back at UFC 257 was not a fluke, McGregor will look to remain to get his lost respect back after suffering the first stoppage loss of his MMA career.