Terrance McKinney vs Ismael Bonfim Prediction: Who Wins at UFC 283? 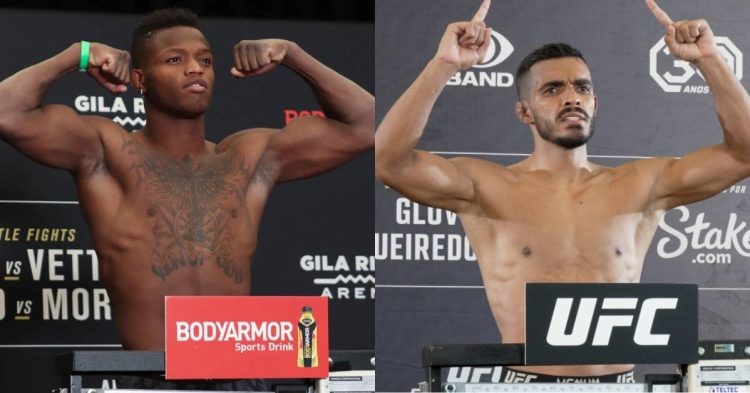 Terrance McKinney is set to take on Ismael Bonfim in the early prelims for UFC 283. Local legend Glover Teixeira and Jamahal Hill will headline the Brazil card for the vacant UFC light heavyweight title. There will be another title fight on the card as Deiveson Figueiredo and Brandon Moreno fight for the 4th time for the undisputed UFC flyweight championship.

When you see me throw the dubs up for warrior camp

McKinney is a UFC lightweight upstart with a 13-4 record. He is coming off a dominant, first-round submission victory over Erick Gonzalez at UFC Fight Night: Santos vs Hill. Mckinney was also involved in a short yet brutal war against Drew Dober in March last year. McKinney is 3-1 in his UFC career. He also appeared on Dana White’s Contender Series but failed to win his bout and earn a contract.

A BIG moment for Ismael Bonfim in the first 💥

[ #DWCS is LIVE on @ESPNPlus ] pic.twitter.com/leiulucJFC

Mckinney’s opponent, Ismael Bonfim will be making his UFC debut at UFC 283. Unlike McKinney, who lost, he earned a contract through Dana White’s Contender Series. He did so by beating Nariman Abbasov by unanimous decision. Bonfim has not lost a professional MMA bout since he was defeated by Renato Moicano in 2014 in the promotion, Jungle Fight. He enters the UFC with a 12-fight win streak.

Heading into this fight, both competitors are riding a wave of momentum and hype. Both fighters are explosive finishers which leads many to believe that this bout will not go the distance. T. Wrecks particularly is a very powerful striker who often likes to go all out. Bonfim is a solid striker as well, however, his standup game isn’t very technical. This is highlighted by their significant strike statistics.

However, the American featherweight also has a tendency to keep his wrestling skills in his back pocket. Instead, he chooses to engage his opponents on the feet. Such a happenstance will greatly benefit Ismael. The Brazilian also has finished more of his fights via KO/TKO than McKinney.

All in all, McKinney definitely has more ways to win the fight at UFC 283. If he uses his takedown skills and ground game to threaten Bonfim and outstrike him, this should fight should be in the bag for him. And fans will be hoping that if he wins this fight, a bout against Paddy “The Baddy” Pimblett will be next.