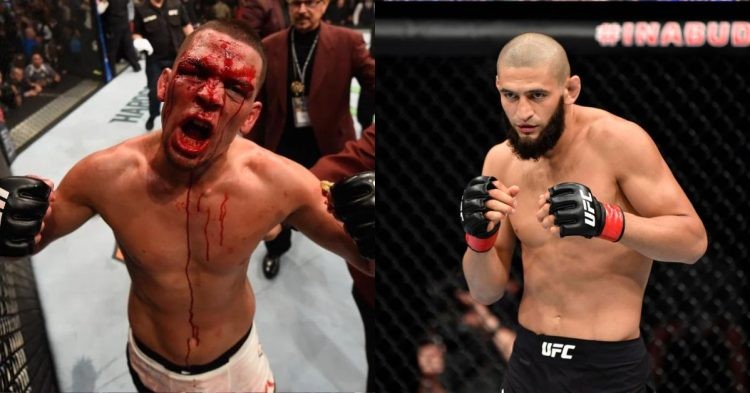 Khamzat Chimaev will be squaring off with Nate Diaz in the main event of UFC 279, which is going to take place on September 10. Most critics and fans are positive about the result of this fight and the popular opinion being Khamzat destroying the veteran in his last fight in the UFC.

Ahead of the fight, Chimaev was asked in the press conference for his game plan before going five rounds with Nate. The Diaz brothers are known for their incredible gas tank and no matter how old Nate is, he will have little to no problem going five rounds. Khamzat stated:

Meanwhile, in Khamzat’s last fight with Gilbert Burns, he went full-on in the first rounds but later he was exhausted. It might be trouble for Khamzat if he is unable to finish off Nate in the first few rounds.

“I hope he can go five rounds. It’s good for him, show his heart you know, and go away from the UFC like a warrior.”

However, the Chechen fighter seems to be unfazed about that as he is confident that he can end the fight in the earlier rounds. Even before the fight, Khamzat will be ready if Team Diaz tries to provoke or things turn into chaos.

Khamzat Chimaev Is Confident That He Will Stop Nate Diaz Easily

Khamzat Chimaev is all about aggression and whether that has proved well so far for him, in this fight he might get in trouble for his fighting style. When he fought a top contender in Burns, he was unable to get a stoppage victory and it was for the first time that he had to rely on a decision win.

In the same interview he was asked if that could bother the results of the fight, he seemed to be taking this aspect not too seriously. He is certain that Nate is not the same old fighter and the age will take a toll going into the fight. ‘Borz’ said:

“I don’t know brother how I change – we will see in the fight. I’m gonna go and take his head off, you know.”

But every fight fan can agree that regardless of what is being said about Nate Diaz or his brother Nick, they are some of the toughest specimens in mixed martial arts. Regardless of age, Nate has shown his heart and willingness to go to war in his last few fights.

The Stockton slugger rarely takes the normal route or abides by the rules. Most of the time Nate seeks out trouble, but also this is why he is one of the most marketable fighters in the promotion.

However, it doesn’t matter if Nate wins or loses and neither does he care. He has always been the one to come into the Octagon and make a bloody mess out of his opponents and entertain the fans.