“That Was a Bad Stoppage”- Daniel Cormier, Francis Ngannou Frustrated With Referee After Early Stoppage in Derrick Lewis vs Sergei Pavlovich at UFC 277 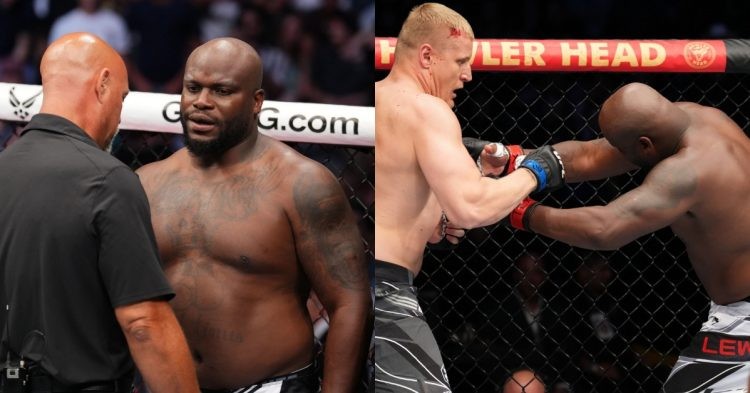 Derrick Lewis unhappy with the stoppage at UFC 277. (Images via Twitter)

Controversial stoppage at UFC 277 as Sergei Pavlovich knocks out Derrick Lewis in the very first round. But it seemed like Lewis was not quite hurt and the referee made a big mistake.

The bout started with both Sergei and Derrick swinging for the fences. They did not even waste a second in trying to feel each other out. Fans expected it to be a brawl, but nobody expected it to be over as quickly as it was. Pavlovich was the one to land the big blow and knock Lewis down.

But as the fans know, Lewis has the tendency to play possum to lure his opponents into a false sense of security. He then lashes at them like a cobra waiting for its chance to strike. However, the ref did not see it that way. He jumped in only 55 seconds into the fight to wave it off.

Sergei Pavlovich gets his fourth straight KO in under a minute ⏱ #UFC277 pic.twitter.com/qLgV2iJq0y

Lewis immediately jumped up and started to protest the stoppage. It definitely seemed like Lewis was hurt by a few of the punches by Sergei. But after he dropped The Black Beast, it did not seem like the majority of his punches landed on the ground. Even the former UFC Heavyweight Champion Daniel Cormier and Joe Rogan pointed it out in the commentary booth.

Following the fight, fans and fighters could not stop themselves from expressing their displeasure at the stoppage. Fans are always excited to see Derrick Lewis fight because there is always the possibility of a spectacular knockout taking place.

However, this stoppage felt more like a whimper. Along with the fans, it seems like the current heavyweight champ Francis Ngannou and Daniel Cormier, both are in agreement that the stoppage was not particularly a good one.

Here are some of the reactions to the stoppage.

This was a bad stoppage!!!!

Did you not watch Derrick Lewis teeing off on Tai last fight before he came back and won? Derrick was hurt but Dan jumped the gun.

“Who Do You Think Broke It”- Magomed Ankalaev Breaks Anthony Smith’s Leg, Finishes Him in Round 2 at UFC 277