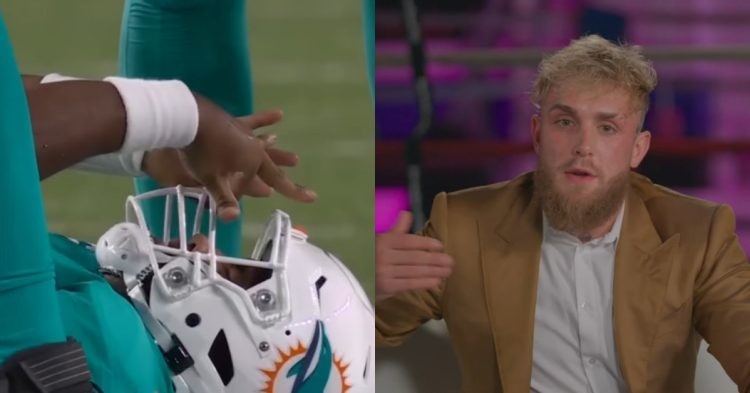 After making a significant dent in the combat sports community, it looks like Jake Paul is trying to change aspects of the NFL as well! During a game between Miami Dolphins and Cincinnati Bengals, the Dolphins’ quarterback Tua Tagovailoa took a nasty bump. Although Miami lost the game 27-15, it was the nasty bump which took all the attention away from the match itself.

NFL has a pretty dark history of having players who suffer from CTE which is a direct result of repeated head trauma and untreated concussions. During a game prior to the one against the Bengals, Tua also suffered a head injury. But he was declared fit for the game on September 30th after going through the controversial ‘concussion protocol.’

However, it did not turn out to be the best decision in the end as he was stretchered out of the field. He was subsequently ruled out of the game and taken to a hospital. So the question arises, were the coaches lying about his fitness ahead of the game? Jake Paul has recently alluded to it and shared his own story of how his coach made him cheat the concussion protocols.

“When I was in high school football, my coaches would tell me to take the concussion test at the beginning of the year and fake it and do it slower. So that if I actually did have a concussion, when I took the test, my results would still show that I’m okay so that I’d be able to play in the game…”

“So I do think athletes and coaches both play a part in this. I’m not saying any of that happened with the Miami Dolphins but these champions, these quarterbacks, guys like Tua they wanna play and they’re gonna do anything to get into that game because of how competitive they’re.”

“But these things needed to be taken more seriously and we need more measures put into place so that things like this don’t happen. Because that sh*t was f****ng scary. His fingers locked up. You see that type of sh*t happen in boxing. So we’re praying for you Tua and we hope you’re alright.”

Jake Paul’s repeated jabs against UFC and its president Dana White brought a lot of eyeballs to the fighter pay issue. It gave him a lot of credibility with the MMA community as well. He has backed up his words and has provided a great opportunity for female boxing champ Amanda Serrano, who was severely underpaid prior to being managed by him.

Can his recent comments bring attention to the decades-long controversy surrounding the head trauma football players suffer? Only time will tell.

Jake Paul will return to boxing against a former UFC champion

After a lot of speculation about his next opponent, Jake has confirmed that it is indeed Anderson Silva that he will fight in October. After losing two opponents, Tommy Fury and Hasim Rahman Jr, his August 6th event had to be cancelled. Despite small rumours of him choosing Andrew Tate as his next opponent, Paul ultimately chose the much more exciting option.

The fight goes down in Phoenix, Arizona on October 29th. It will be a great contest to see how much he has progressed since turning pro with a record of 5-0. However, Jake has already set up some options for himself after the Silva fight as well. While Nate Diaz will always be in the mix, The Problem Child was recently seen talking to Tommy Fury about re-booking the fight between them.