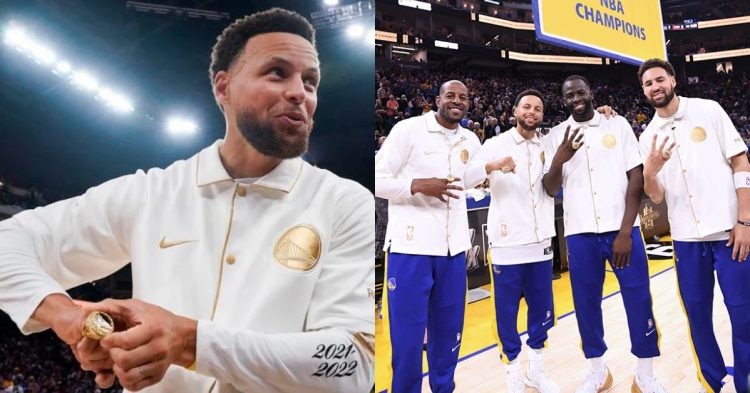 The 2022-23 NBA season is underway as the Golden State Warriors defeated the Los Angeles Lakers earlier today. Although the game had its moments, the best ones came from the ring ceremony. The NBA awarded the Warriors players their championship rings for the 2021-22 NBA championship.

As Stephen Curry wore his 4th ring, many moments caught the attention of the public eye. The Warriors came out to attend the ceremony in style as the top for the event was in a white and gold colorway. It was as if the Warriors were NBA royalty, which wouldn’t be a false statement considering the way they have been performing. One of the most wholesome moments during the event was when Klay Thompson paid tribute to his mother.

Klay Thompson thanks his mom during the Warriors ring ceremony ❤️

He said, “Wow, Dub Nation, Imma keep it short & sweet. We love you with all of our hearts, I mean me and Wiseman were in here a summer ago just looking at this empty arena like, ‘man, it could use a banner… And now we’re here, I just wanna send a special shoutout to my mother, and I know she’s watching, she couldn’t be here tonight but I love you so much mom. Thank you for everything, love you.”

As we all know, WNBA star Brittney Griner is currently in prison in Russia. For context, Russian officials found vape cartridges containing a form of cannabis at an airport. Since then, she has been kept in the country despite the many US attempts to bring her back. Many NBA players have done their part to voice their opinions on the matter. This time around, it was Steph Curry to do that.

Steph said, “Shoutout a very special person of the basketball community. Brittney Griner’s birthday is today, she’s 32 years old, we want to continue to let her name be known… We hope that she comes home soon.”

Steph has always been one to help raise awareness about Griner’s controversial situation. Together with him, LeBron James has also openly supported her in the past, along with many other NBA stars.

Jordan Poole’s reaction to getting his first ring 🤣 pic.twitter.com/gDSnQ5zbOc

Apart from that, there weren’t many wholesome moments but GSW’s young superstar Jordan Poole seemed to be making the rounds online for his reaction. The 2021-22 NBA championship was his first-ever title and it looked like he was more than excited to wear his first ring. Poole has recently signed a new lucrative contract extension that will see him receive $140 million from the franchise.

The Warriors also kickstarted their 2022-23 season on a high note after beating the Lakers 123-109 as Steph put in a shift for The Bay once again. They will be looking to make it two titles in a row and to be honest, the franchise does have a world-class roster to make that dream come true.