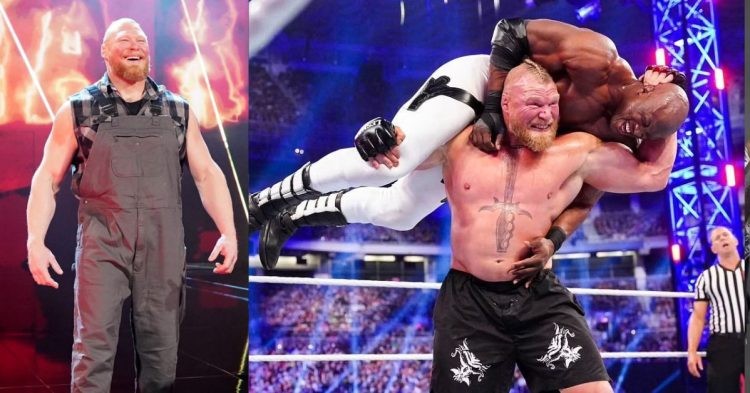 Brock Lesnar’s return was the one that sent tremors across the wrestling world. As Bobby Lashley was interrupted by Brock Lesnar, who was making his first appearance in WWE following his SummerSlam ring-lifting defeat to the Tribal Chief Roman Reigns for the Undisputed WWE Universal Championship, challenged Lashley.

The Lesnar vs. Lashley match has been long-desired by fans, and it finally appears that we’ll get it. Lashley has also stated that he wants to compete against Lesnar for a number of years. Before the scheduled Lashley vs.  Rollins United States championship match, Lesnar made a surprising return. When Lesnar entered, he greeted Lashley over the microphone before finishing off the US champion with several F-5s and a suplex.

Before departing, Lesnar delivered a kimura on Lashley. Lashley proceeded with the planned title defense and lost to Rollins in the final. Later on in the program, Lashley challenged Lesnar to appear at the next week’s episode of Raw to atone for his conduct on Monday.

The angle was apparently used to prepare for a rematch involving Lesnar and Lashley. At the Royal Rumble in January, the two finally squared off, and Lashley defeated Lesnar for the WWE Championship after to intervention from Roman Reigns.

The following month, the two were scheduled to face off in the Elimination Chamber WWE Championship match, but they never got into a fight since Lashley was eliminated from the contest before Lesnar arrived. The two Juggernauts will likely collide in Riyadh, Saudi Arabia at WWE Crown Jewel.

After the unexpected return of the Cowboy or The beast or Countryboy Brock Lesnar, fans are quick to figure out his next opponent to be Bobby Lashley. The last encounter between them was just lame. These two men have a similar history, they both have a wrestling background, and an MMA background.

Vince calling Triple H from his house after seeing Brock Lesnar return to fight someone other than Roman Reigns pic.twitter.com/uuwkLTGDNg

When Lesnar vs Lashley was announced for the Royal Rumble, fans were happy as they finally got what they have asked for a long, long time. But the match was disappointing. To explain the match in short it was just suplex-suplex more suplex some more suplex and a spear by Roman Reigns to Lesner to give a W to Lashley.

Brock Lesnar vs Bobby Lashley without any outside shenanigans.

Oh boy how have I dreamt about this pic.twitter.com/0m7VsTkXs5

Fans are urging papa H to book this once-in-a-lifetime dream match in a better way than the last time. And after seeing the booking by Triple H in the last 75 days, I’m sure that this match will be one of the best Lesnar matches in recent times, in Paul we trust.