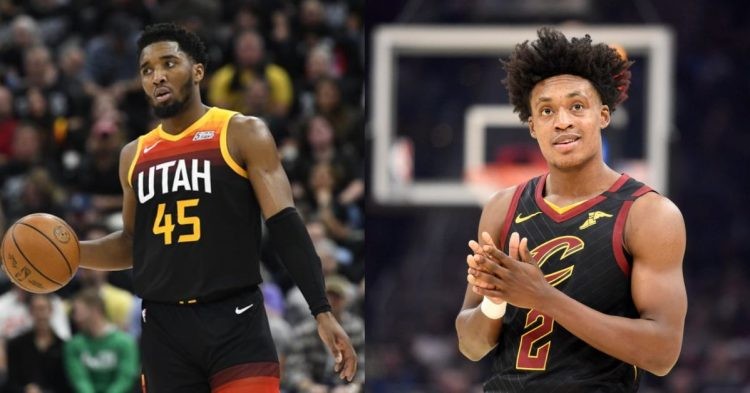 In a sudden move that shocked the NBA world this offseason, Donovan Mitchell from the Utah Jazz has been traded to the Cleveland Cavaliers. This was reported by NBA insider Adrian Wojanowizki. We already knew that the Jazz was in a rebuild. They just traded Rudy Gobert to the Minnesota Timberwolves.

BREAKING: Donovan Mitchell has been traded to the Cavs, per @wojespn pic.twitter.com/4evPDzPoQ2

Everyone still expected them to keep their star point guard Spida. However, he is now on his way to Cleveland and hopes to make them a contender in the Eastern Conference. One must wonder how this deal went down and what the trade consisted of. Well, here is all you need to know about the Donovan Mitchell to Cavs trade.

This is definitely the biggest trade to go down so far this NBA off-season. Mitchell is a young rising star in the league who has already proven himself as a solid player. Additionally, he brought the Jazz back into relevance in the short amount of time he spent with them. Yet, it seems the team lost faith in its star core and decided to be done with them both.

The Utah Jazz traded Donovan Mitchell to the Cleveland Cavaliers in return for Colin Sexton, Lauri Markkanen, and Ochai Agbaji. Moreover, the Jazz also got three unprotected first-round picks and two pick swaps along with this tidy bunch of players.

It is easy to say that the Cleveland Cavaliers have won this deal and will be much better next season. On the other hand, Utah seems to be looking to the future and playing the long game in terms of rebuilding and acquiring draft picks.

Not to give unnecessary credit, but Luka Doncic and the Dallas Mavericks are indirectly responsible for this trade. The Mavs managed to eliminate the Jazz in the first round despite having only one star. This was largely what set a course of action for the Jazz this offseason and helped them decide to move on.

We really do not know what Spida feels at this moment as this news is very fresh. However, we do know that he recently sent out a tweet with just exclamation marks.

In any case, we wish Mitchell the best with the Cleveland Cavaliers and hope he makes them an exciting team to watch in the 2023 NBA playoffs.