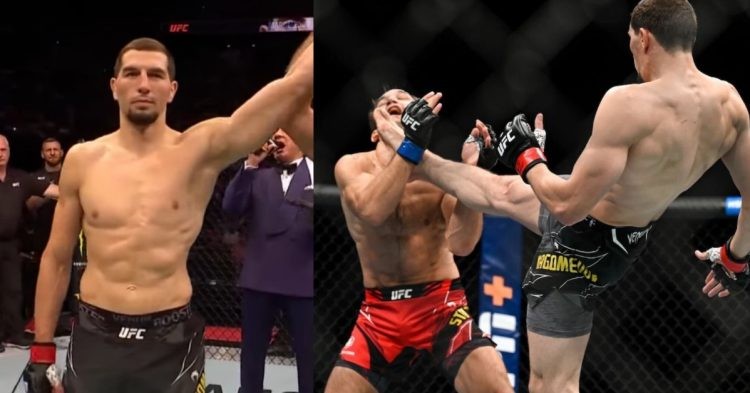 19 seconds was all it took for Abus Magomedov to make an impression infront of the UFC audience. He took on Dustin Stoltzfus on his UFC debut on the prelims of UFC Paris. What a debut it was as he knocked Dustin out within 19 seconds of the very first round.

This was the first ever UFC event in France and the French audiences were treated to some nasty finishes in the prelims. The preliminary card had 6 fights on it and 4 of them ended in finishes. Cristian Quinonez knocked out Justin Taha at the 3:15 minute mark of the first round.

The second KO of the night was from Benoit Saint-Denis who got rid of Gabriel Miranda at the 0:16 minute mark of the second round. But the fastest finish of the night came in the main event of the prelims where Abu put on a scintillating performance against Dustin Stoltzfus.

The Dagestani fighter opened up the fight with a massive front kick. It startled Dustin who started to back-paddle. Taking advantage of that, Abu came in with a massive uppercut which dropped Dustin. It did not take him much longer to finish the fight after that as he wrapped things up with some nasty ground and pound.

Abus Magomedov not just made an excellent impression infront of the audience, but he also left his mark on the history book. He now holds the record for the 4th fastest finish for a fighter on their UFC debut. The first spot is shared by Terrance McKinney and Todd Duffy who won their UFC debut fights in just 7 seconds.

“The hype is real. It was hard for me. I have to performance because there (are) people waiting for this and now I’m happy.”

With the spectacular win, Abus now has a record of 25-4 in his career. If this is anything to go by, the UFC middleweight division has a new star in Abus Magomedov.